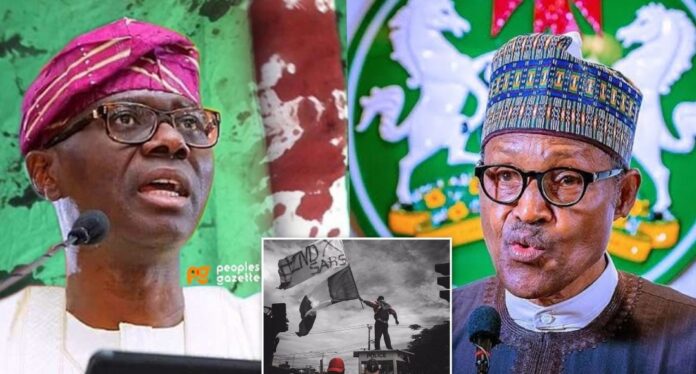 #EndSARS lawyers who defended the protesters in Lagos under the aegis of the New Nigeria Network and the Radical Agenda Movement in the Nigerian Bar Association (RAMINBA) has demanded that President Muhammadu Buhari and Governor Babajide Sanwo-Olu should resign.

In a press conference held in Lagos on Monday, the group, through its chairman, Adesina Ogunlana, argued that Messrs Buhari and Sanwo-Olu were culpable in deploying soldiers to massacre peaceful and unarmed protesters at the Lekki tollgate on October 20, 2021.

“We are convinced beyond doubt that the military personnel who carried out the massacre at the Lekki Toll Gate could not have acted without clearance from the President and Commander-in-Chief of the Armed Forces of the Federal Republic of Nigeria, General Muhammadu Buhari (retd). We place the blame of the Lekki Massacre at the doorstep of General Buhari and demand his immediate resignation,” explained the lawyers.

The lawyers argued that Mr Sanwo-Olu could not be absolved of the events that led to the massacre.

“We are aware that it may be argued that as governor of a state, Mr Sanwo-Olu does not have maximum control over military personnel up to the extent of the capacity of the commander-in-chief of the Armed Forces,” noted the lawyers, “the overwhelming evidence presented before the panel has shown that as the chairman of the Lagos state security council, he influenced the processes that led to the dispatch of soldiers to the Lekki Tollgate to fire live bullets at unarmed protesters.”

The lawyers added, “We hold that he stands indicted, and he should resign immediately.”