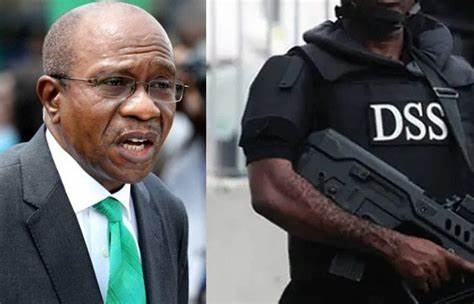 The battle between the Governor of the Central Bank of Nigeria, Godwin Emefiele, and the Department of State Services over a plan to arrest the CBN governor may have been put on hold as Emefiele resumes duty.

The CBN governor on Monday resumed office at the CBN headquarters, after spending several weeks in the United Kingdom and the United States following reported plots by the DSS to arrest him.

In a statement by the CBN Director of Corporate Communications, Mr Osita Nwanisobi, the apex bank said the governor had resumed to work, amid concerns over his absence since last month.

“The governor resumed with renewed vigour to perform his duty ahead of the first Monetary Policy Committee meeting of the year scheduled for January 23 to 24, 2023. Mr Emefiele remains committed to performing the task before him in line with his oath of office and the policy direction of President Muhammadu Buhari.”

The bank further urged Nigerians to continue to support the policies of the bank aimed at ensuring a stable financial system and the Nigerian economy in general.

Meanwhile, the Department of State Services has denied invading the CBN head office in Abuja.

There were reports in some media outlets (not E247mag) that the DSS had stormed the CBN headquarters to arrest the governor of the apex bank.

In a statement on Monday by the DSS Public Relations Officer, Peter Afunanya, the agency denied arresting Emefiele.

The statement read in part, “The attention of the Department of State Services has been drawn to the false news making the round that its operatives invaded the Central Bank of Nigeria and arrested its Governor, today 16/1/23. This is fake news and quite misleading.”

However, the development appears to have put a temporary stop to the reported plot by the DSS to arrest the nation’s number one banker.

Emefiele, perhaps the most embattled and controversial CBN governor in the recent history of the country, left the country last month following the decision of the DSS to arrest him.

In December, the secret service agency approached an Abuja court to arrest Emefiele over allegations bordering on financing terrorism and money laundering, among others.

However, the Federal High Court sitting in Abuja reportedly stopped the DSS from arresting the CBN governor for alleged  “acts of financing terrorism, fraudulent activities and economic crimes of national security dimension.”

The DSS filed a suit on December 7, 2022, seeking to arrest the CBN governor. But Justice J.T  Tsoho declined to grant the application for the governor’s arrest on December 9, 2022.

The suit, with reference number FHC/Abj/CS/2255/2022, had State Security Services as the applicant.

Refusing to grant the DSS request, the judge said, “In the light of the foregoing reasons, I decline to grant this application ex parte. If the applicant believes that the evidence available to it so far is sufficient, then it can as well arrest and detain the applicant, even without the order of the court. If, however, the applicant desires to still pursue this application, then it should place the respondent on notice considering the sensitive public office that he occupies.”

Also, the High Court of the Federal Capital Territory, on December 29, barred the DSS and the Inspector General of Police from arresting and detaining  Emefiele, over allegations of terrorism and sundry offences against him.

Meanwhile, the court has ordered an accelerated hearing in the matter and abridged the time of both the respondents and the applicant.

Also restrained by the court order are the Attorney General of the Federation, the Economic and Financial Crimes Commission and the Central Bank of Nigeria, who are listed as the first, second and fifth defendants.

Justice MA Hassan made the order while delivering judgment in a suit marked GAR/CV/41/2022, filed by the Incorporated Trustees of the Forum for Accountability and Good Leadership

On Sunday, six Senior Advocates of Nigeria, a former Attorney General of the Federation condemned the move to arrest Emefiele for terrorism, insisting that the rule of law must prevail.

In a letter addressed to the Minister of Justice Abubakar Malami (SAN), they urged him to ensure that the government, especially the security agencies, observe the Rule of Law as a foundation of a democratic society by complying with court decisions.

In the letter signed by former Attorney General and Minister of Justice and Defence, Adetokunbo Kayode, Oba Maduabuchi, Emeka Ozoani, M.M Nurudeen, Abdul Mohammed, and Dr Emeka Obegolu, they said they observed moves to still proceed and sidetrack and disobey the court decisions and unduly and unlawfully Interfere with Emefiele’s fundamental rights.

The letter, dated January 6, 2023, was titled Emefiele: let the rule of law of prevail.

Meanwhile, several groups supporting Emefiele had criticised the move by the DSS.

A coalition of human rights activists, the Arewa Youth Consultative Movement and public interest lawyers operating under the aegis of the Coalition of National Interest Defenders, had expressed concern about the DSS plot to arrest Emefiele.

They claimed the plan to sack the CBN governor was orchestrated by politicians who were not comfortable with the economic reform policy of the apex bank, especially the designation of the naira.

Reacting then, the DSS stated that it would not join issues with those protesting the suit filed against the CBN governor, saying they were on a wild goose chase.

In a release signed by its spokesman, Peter Afunanya, the agency said it remained focused and unbiased and not succumb to propaganda, intimidation and the desperation of hirelings to undermine it.

“While professionally discharging its mandate, the DSS pledges to remain focused and unbiased. It will also not give room to the use of falsehood and deceit to misdirect public understanding and perceptions of issues of national importance.

“The service warned those on a wild goose chase to be mindful of their actions. Similarly, it urges members of the public to disregard the vituperations and rantings of misguided elements and not allow themselves to be used as instruments of destabilisation.”

However, there are concerns that the battle to arrest the CBN governor may resume as the DSS has yet to give a definite reason for its sudden change of mind.

They wondered why the DSS which had in December said it would not be distracted from performing its duty, especially in the governor’s probe,  suddenly denied arresting Emefiele on Monday.