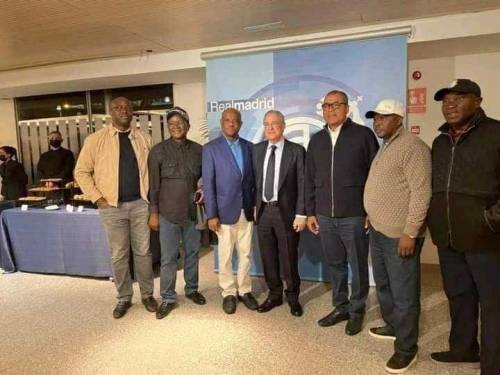 Governor Nyesom Wike of Rivers State has given some of his colleagues multimillion naira bullet-proof vehicles to win their support for his ambition to be the Peoples Democratic Party (PDP) Vice Presidential candidate for the 2023 election, SaharaReporters has gathered.

Sources said the governor made the donation after Wike and four of the governors elected on the platform of the party recently returned to Nigeria after embarking on a trip to Spain.

Sources said Wike informed his colleagues during some strategic meetings about the 2023 poll in Spain that he is interested in running as Vice Presidential candidate to Governor Aminu Tambuwal of Sokoto State or whoever emerges as the presidential candidate of the party.

“As soon as Governor Wike returned to Nigeria with four other PDP Governors from Real Madrid, he gave them each a bullet-proof Prado SUV,” a PDP source told SaharaReporters.

“They travelled to Real Madrid in a private jet belonging to Rivers State. He told them while in Spain that he will be running to be Tambuwal’s running mate.

“The PDP governors were in Real Madrid over 2023 poll and not on the instance of the Madrid-based football club. They vowed to play a significant role in the choice of who will fly the party’s presidential ticket.”

There have been reports that Wike is plotting to emerge as running mate to whoever emerges as the presidential candidate of the PDP but the governor has denied it.

At the height of the 2016/2017 leadership impasse which threw up Ali Modu Sherrif and Ahmed Makarfi as factional chairmen of the party, Wike singularly assumed responsibility for offsetting the bills of the party, including its multi-pronged court legal battles.

At the height of the deadly herders belligerence against farmers in Benue State in 2018, Wike visited his colleague, Ortom, and donated N200 million for the upkeep of displaced Benue people in internally displaced persons’ camps.

In January 2021, he also donated N500 million to Sokoto to support the rebuilding of the state’s central market.