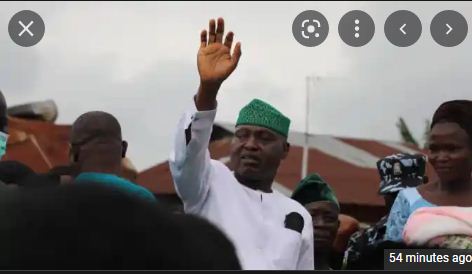 The Independent National Electoral Commission has declared the candidate of the All Progressives Congress, Biodun Oyebanji, the winner of the Ekiti State governorship election.

The Returning Officer for the election, Prof Kayode Adebowale, who is the Vice Chancellor, the University of Ibadan, announced the results.

Adebowale said, “Oyebanji, having scored the highest number of votes is hereby declared the winner and returned elected as the governor-elect of Ekiti State”

The APC scored 187,057 votes to defeat its closest rival, the SDP, which garnered 82,211 votes, the PDP, which got 67,457 votes and 13 other parties which participated in Saturday’s governorship election.

While the agent of SDP, Owoseeni Ajayi, did not sign the forms for the votes cast, the agent of the ADP, said, “Instead of having polling centres, what we have in Ekiti are vote-buying centres”.

Similarly, in Ikogosi-Ekiti, Ekiti West Local Government Area, where Oyebanji hails from, residents also began celebrating the victory of their kinsman at the poll.

In different parts of the state also, some members of the ruling party celebrated the victory, describing it as well-deserved.