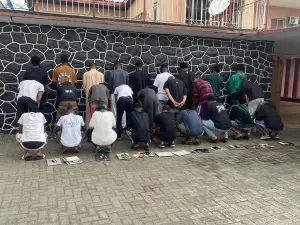 Operatives of the Lagos Zonal Command of the Economic and Financial Crimes Commission, EFCC, have arrested 40 suspected internet fraudsters in some parts of Lagos State.

They were arrested at Awoyaya and Oral Estate areas of Lekki, Lagos State on August 29, and September 1, 2022, following credible intelligence received by the Commission about their alleged involvement in computer-related fraud, identity theft and obtaining money under false pretence.

At the points of arrest, laptop computers, mobile devices containing false documents as well as luxury cars were recovered from the suspects.

The suspects will soon be charged to court.