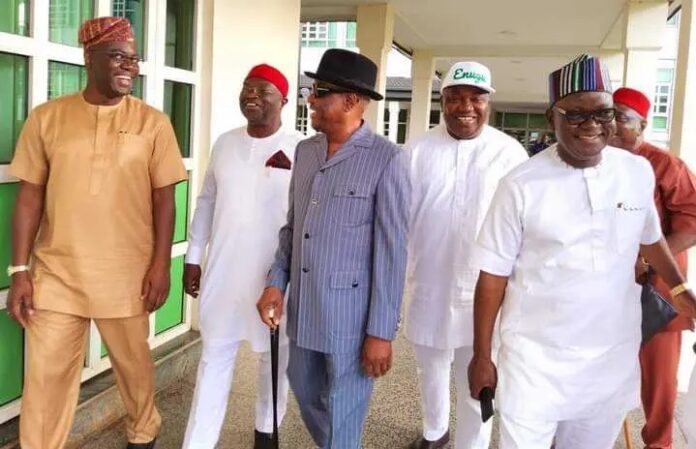 The disgruntled governors of the Peoples Democratic Party convened on Sunday in Enugu to discuss their course of action following the visit by the party’s presidential candidate, Atiku Abubakar, to the governor of Rivers State, Nyesom Wike, in his private residence on Thursday in Abuja.

The meeting is coming three days after Atiku held a private meeting with Wike where the presidential candidate pleaded for his support ahead of the 2023 presidential election.

As part of his ongoing efforts to end the simmering problem between him and the five PDP governors led by Wike, the PDP standard bearer met with the governor of Rivers.

The Abuja meeting, however, ended in a deadlock as the Rivers governor reportedly insisted that there would be no peace deal until the National Chairman of the party, Iyorchia Ayu, resigned from office.

The party had been engulfed in crisis since its presidential primary in May.

Wike, who lost to Atiku, had expressed dissatisfaction with the exercise, stating that he was unfairly treated by the PDP and was not carried along.

Wike insisted that Ayu must resign if his camp must reach a truce with the party’s flag bearer but Atiku said he had no power to remove the chairman.

Atiku said if the chairman must be removed, due process must be followed by the party’s constitution.

After a series of meetings between them and their representatives failed to address the crisis, Wike and some of his colleagues and allies boycotted the inauguration of the party’s presidential campaign council in Abuja last Wednesday.

One of Wike’s close allies, who was privy to what was discussed at the Abuja meeting, Senator Olaka Wogu, had told The PUNCH in an interview that the governor reiterated his demand to the former vice-president that there was no going back on his demand that Ayu must go.

He affirmed that the meeting between Atiku and Wike ended in a stalemate after the governor stood firm on his demands.

Unconfirmed reports had claimed that Atiku promised to support Wike for the Presidency in 2027. This was later denied by Atiku’s campaign spokespersons.

Findings on Sunday, however, showed that the five disgruntled governors of the party, led by Wike, convened in Enugu, the capital of Enugu State, for a strategy meeting in order to continue their resolve to oust the PDP national chairman from office.

Report shared that member of the PDP National Working Committee said in confidence that the governors met solely to strategise on how to make the party and indeed, Nigeria better.

“The big five governors are meeting, strategising for a better PDP, a better Nigeria where probity, equity and justice reign supreme,” he said.

Pressed to disclose the specific agenda of the meeting, the NWC member who is one of those who recently refunded N28.8m into the party’s account stated, “They are united for a purpose to ensure Ayu is sacked for the unity of our party,” insisting, “Ayu must go.”

The governors, he noted, deserved special praise for championing the cause of justice and equity, not only for the PDP but for Nigeria as a whole.

“A leader on his own said he was going to quit if a northerner emerged as the PDP’s flag bearer. A northerner emerged but he did not want to go. It is a pity that some have chosen to shut up but these ones (governors) are insisting on the right thing to be done; we have to congratulate them.

“PDP is for all. No one, however powerful, owns it more than others. This is the message they are trying to pass. We will get there,” he maintained.

Also, a frontline member of the aggrieved governors’ camp, who also confirmed the meeting, revealed that they met to review the conditions given to Atiku during his meeting with Wike in Abuja on Thursday.

“The meeting in Enugu is to review Atiku’s visit to the Rivers governor in Abuja. They had told him at the meeting that Ayu must go and that the condition is not negotiable. They also gave him some other conditions.

“Atiku agreed that Ayu would go but due process must be followed to avoid a constitutional crisis. So, the aggrieved governors are meeting to fashion out plans for Ayu’s exit and also review some of the conditions they gave to Atiku. They will also look at some of the things Atiku said at the meeting with Wike,’’ he explained.

The National Vice-Chairman, South-East zone of the PDP, Chief Ali Odefa, could not be reached on the phone on Sunday but a reliable source, who works with him, said, “Yes. It’s not a lie. Four governors alongside Wike were here in Enugu for a crucial meeting. The purpose of that meeting we don’t know yet.”

Reacting to the development, a former National Auditor of the PDP, Raymond Nnaji, described the game the governors are playing as extremely dangerous, adding that if they pulled the party down, it would equally affect them individually.

He said, “The governors have candidates they will put in office, otherwise they will have a problem. All these things they are doing is just a waste of time. If PDP fails in the national (election), all of them will fail. It will have a bandwagon effect; there is no way they can make changes now.

“Ugwuanyi, for instance, is the senatorial candidate for Enugu North, there is no way he can decide to go to another party or support another party now.”

Nnaji responded, when asked why they are not supporting the PDP presidential candidate. ‘They have created difficulties in the hopes of solving them, but their attempts to do so have failed. As a result, they are searching for a solution. Therefore, if they demolish the house, everyone will suffer, including them, They are just playing games; that is how I see it”.

“So, the meeting in Enugu is nothing but to play games. I believe they want to show that they are still intact. The party shouldn’t be afraid of their meeting. Let them continue to meet.”