DAVIDO RECEIVES MORE THAN 60MILLION NAIRA AHEAD OF HIS BIRTHDAY 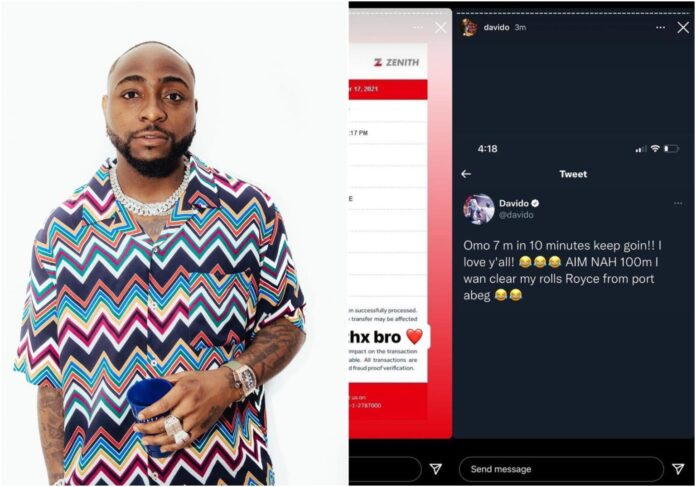 Famous music artiste Davido has received over 60million Naira after asking his friends to send him 1million Naira each ahead of his birthday.

The singer, who will turn 28 on November 21, took to his Instagram story to ask colleagues to each send him a million Naira. In a video posted on Instagram, which many took to be a joke, Davido called on those he had helped in the music industry to each send hi money.

Davido said, “We rise by lifting others abi? Me I don dey rise dey lifting others for the past 100 years. So I want to know who my friends are. All of my friends one one million Naira. They said we are 30BG. If you don’t send your own. You out of here. You are gone (sic).”

The singer created a new bank account, posted his account number on his stories thread, and posted screenshots of money sent into it to show his seriousness.

The singer has been updating his Instagram stories regularly with screenshots of transactions and individually thanking everyone who sent him money.

The singer has been updating his Instagram stories regularly with screenshots of transactions and individually thanking everyone who sent him money.