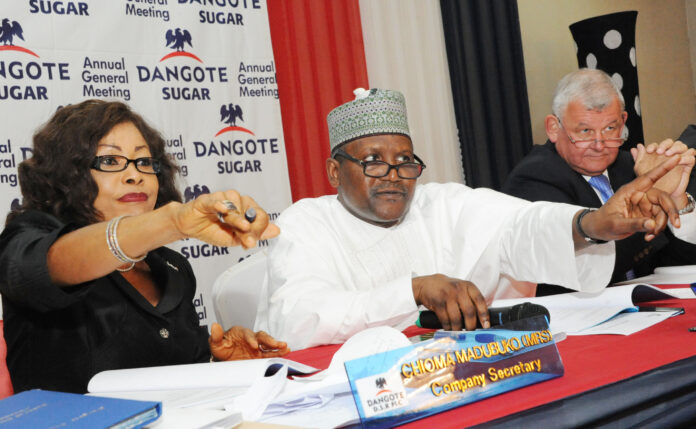 Dangote Sugar has been indicted of price fixing by BUA Group. The competitors have been at discordant over market dominance, but the rivalry took a different turn on Thursday.

But BUA turned down the suggestion, choosing to leave its price at the same rate. Prior to Ramadan, tbe price was N13,000 per bag, but Dangote and one other market competitor wanted the price increased to N30,000 per bag.

According to a report by The Capital, Rabiu was reportedly pressured into fixing the sugar price, but when he resisted, they threatened his sugar operation by petitioning the Trade Ministry.

It was stated that BUA didn’t have the license to sell sugar within the country, as his business approval was only for export.

However, in a response letter to the ministry, Rabiu stated that the company was operating in line with its license.

He said that the allegations were a ploy to negatively impact the image of Dangote Sugar Refinery and Dangote Industries Limited, “DSR does not engage in artificial price manipulation of its products, either during the Holy month of Ramadan or at any other time.

“We have never ever increased price of our food items or commodities during the Holy month of Ramadan in the history of our operations”, he said, adding that the company considers price-fixing to be unethical.

BUA had also accused the company of reneging on the Backward Integration Programme (BIP) of the government, stating that BUA is the only one involved in it. But Dangote’s firm denied this claim as well, adding that it has an ongoing 10-year sugar development plan,

The company said its plan includes production of 1.5 million metric tonnes per annum of sugar from locally grown sugarcane.

Meanwhile, Dangote said the company reported its rival to the ministry of trade because BUA could affect the National Sugar Master Plan’s (NSMP) framework.

“DSR made this notification to the Hon. Minister of Industry, Trade & Investments bona fide, via its letter to the Minister dated January 28, 2021 asking the Minister to investigate the matter”, Singhvi said in the letter.