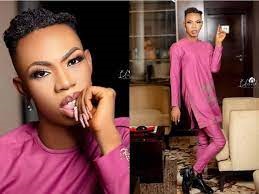 Social media was on Monday awash with clips of James Brown and an unidentified woman engaged in sexual activity.

The video went viral at a time where James Brown, who sometimes identifies as a woman, revealed that he had a girlfriend.

In a video he shared on his Instagram page on Monday, James Brown had said, ”Do you know one thing you guys don’t understand? I said I had a girlfriend and you guys didn’t believe me. Do I not look man enough?

“Try me, bring your girlfriend and let me knack her front and back.”

The video trended alongside the sex tape on Twitter, as tweeps knocked the self acclaimed ‘Princess of Africa’ for having sex with a lady, when he also identifies as one.

In the heat of the knocks, James Brown revealed on Tuesday that he was sad and depressed.

He also revealed that he couldn’t sleep well and felt like he was having a bad dream.

“I can’t sleep well. I am having a bad dream,” James Brown tweeted.

He added, “For the first time in a long time, I am sad and depressed. I feel down and tired. Is this what it feels like?”