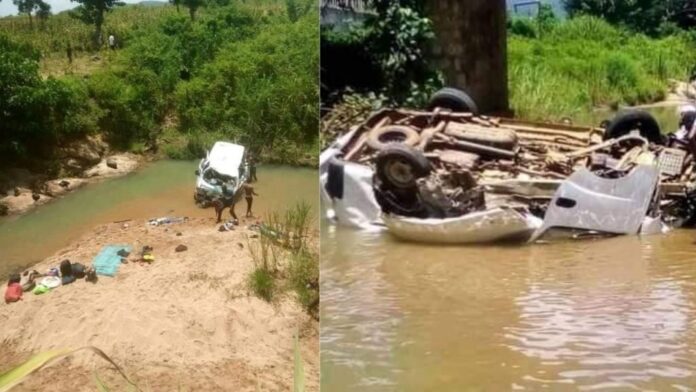 No fewer than four persons were killed in a road accident after the bus they were travelling in fell into a river in Taraba State.
DAILY POST reports that the accident occurred on Sunday afternoon in Sarti, headquarters of the Gashaka Local Government Area of the state.
Several other occupants of the bus, said to belong to the Adamawa State branch of the Christian Association of Nigeria (CAN), were also confirmed to have suffered various degrees of injuries.
The bus was said to have been conveying members of the Christian Reform Church-Nigeria (CRC-N) unity band back to Yola, the Adamawa state capital.
According to an eyewitness account, the passengers, who were all members of the band were being conveyed back from the National Music Concert of CRC-N Unity Band, held in Serti, when the driver lost control and plunged into the river.
The corpses of the deceased members were deposited at the morgue of the Federal Medical Center, Jalingo, while the few available health experts are administering treatments on those that sustained injuries.
Describing the incident as a rude shock, the chairman of the state chapter of the Christian Association of Nigeria, Rev. Jirapye Isaiah Magaji, said the victims died in the service of the Lord.
Reiterating the determinations of the church to give them befitting burials, Magaji, who also doubles as the vice president of the CRC-N , said “I have been moving around since morning consoling with the families of the victims. ”
The premises of the hospital has been taking over by mourners who were there to see the remains of the victims deposited in the morgue.
One of the mourners, who spoke with our correspondent amidst tears, expressed shock at the sad incident, stating that “it is so sad that the church is again in pain. ”
In recent times, the church, DAILY POST reports, has suffered series of setbacks among which includes the recent drowning of a pastor and some members of the church following the capsizing of a boat they were traveling in.