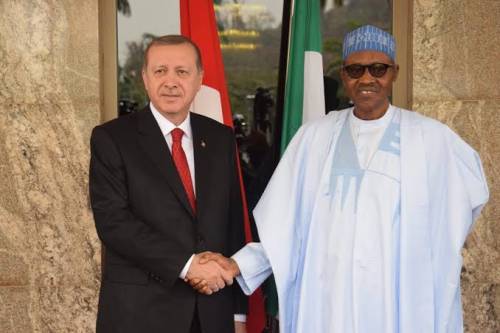 Nigeria’s President, Muhammadu Buhari has entered into a controversial deal with President Recep Tayyip Erdogan of Turkey to keep some Turkey-linked companies in Nigeria under surveillance.

This, according to a report by AfricaReport, is to gain the support of the Turkish government in terms of infrastructure and military assistance, particularly with the rate of insecurity in the country.

In 2016, Nigeria and Turkey were embroiled in a diplomatic row.

The Turkish President, who had just survived a coup and assassination attempt at the time, was on a mission to expose and arrest all those behind the attack that claimed 300 lives.

He claimed the coup plotters were linked to the Gulen movement, which is designated as a terrorist organisation by Turkey and led by Fethullah Gulen, a Turkish businessman and influential cleric who is in exile in the United States.

Gulen, a former ally of Erdogan, repeatedly denied the allegations as he also claimed that he didn’t know 99% of the members of his influential movement which boasts of three to six million members worldwide.

Erdogan made attempts to extradite Gulen from the US but failed and started reaching out to several African leaders with a view to shutting all businesses linked to the Gulen movement in their countries.

On July 28, 2016, the Turkish Ambassador to Nigeria, Hakan Cakil, called on Nigeria to close 17 Turkish schools in the country with ties to the Gulen movement.

“We are requesting the Nigerian government to close down the schools… I have requested officially, both orally and in writing, the closure of these schools.

“Also, I have sent a letter to Mr Geoffrey Onyeama (foreign minister) and Mr Abba Kyari (chief of staff to the president) about this subject and requested their support for the closure of the schools,” he said.

However, considering that Nigeria was facing one of its worst economic downturns ever at the time, the government was reluctant to honour such a request.

Nigeria’s Minister of Education, Adamu Adamu, said the request would not be considered until the Turkish government provided satisfactory evidence.

President Buhari’s adviser on Diaspora Affairs at the time, Abike Dabiri-Erewa, confirmed to local media that “the Ministry of Foreign Affairs through the permanent secretary summoned the Turkish Ambassador immediately the information was received.

“While both countries are working at resolving the issue through every possible diplomatic channel, the Ministry of Foreign Affairs made it clear that such acts against Nigerians will not be accepted.”

Consequently, businesses that were linked to Gulen in Nigeria began removing Turkey from their business names and rebranded completely although they maintained their Turkish orientation.

Some of these companies include the Nigerian Turkish International College (NTIC) with branches in Kaduna, Abuja, Kano, Yobe, Ogun and Lagos. The school changed its name to Nigerian Tulip International School.

Despite these moves, however, Turkey remained adamant.

In 2019, the new Turkey Ambassador to Nigeria, Melih Ulueren, said at an event in commemoration of the third year anniversary of the coup that the Turkish Maarif Foundation had been set up to take over all business interests linked to the Gulen movement.

With Turkey unable to take over the business interests of the Gulen movement in Nigeria, Erdogan decided to take a new approach and give Nigeria an offer that would be difficult to refuse.

With the surge in insecurity in recent times and its many facets including banditry, terrorism, kidnapping among others, the Nigerian government is in desperate need for weapons and intelligence, also, considering the impending arms embargo by the United States Congress due to human rights concerns, Nigeria needed to explore other options and unlike the US, Turkey would be willing to partner with Nigeria without such stringent human rights conditions.

Making a direct reference to Nigeria’s security quagmire, Erdogan during his visit to Nigeria in October 2021 told President Buhari that his administration would continuously share intelligence with Nigerian authorities.

He was quick to add that those behind the attempted coup in Turkey were still very active in Nigeria and there needed to be a quid pro quo.

“The sensitivity we show in fighting terrorism, I hope will be reciprocated by our Nigerian brothers and sisters and our counterparts. The perpetrators of the heinous failed coup of July the 15 FETO are still very active in Nigeria. And we are continually sharing our intelligence with Nigerian interlocutors and authorities,” Erdogan was quoted as saying.

As a show of good faith, Buhari immediately announced the removal of Turkey from Nigeria’s COVID-19 red list. The Nigerian President revealed that he signed eight major agreements with Turkey on several key sectors including energy, defence industry, mining and hydrocarbons among others. Buhari also praised Erdogan for opening his country’s borders to accommodate millions of refugees in dire need of humanitarian support.

Buhari also recently visited Istanbul for the Turkey-Africa Partnership Summit. During the visit which Presidency officials described as ‘epic’, several agreements were reached.

Buhari’s Spokesman, Garba Shehu, said in a Facebook post that Turkish technology in Nigeria will surely quicken the process and efforts to “rid Nigeria of pockets of terrorists and the menace of kidnappers and bandits. From their wide experience and advances in technology in fighting terrorism and banditry, they have a lot to give and they have assured us that they will give that support.”

“The government of Nigeria will not allow any part of our territory to be used to undermine a friendly state such as Turkey. Under our strict Central Bank and Financial Intelligence Unit’s governance structure and management, money from the investments in issue cannot be moved anywhere to finance subversive activities,” said Shehu.

Apart from Turkey’s military assistance, Buhari also hopes to ensure that Erdogan would assist Nigeria to build infrastructure which has been the exclusive preserve of China.

The Marif Foundation funded by the Turkish government is also expected to build a five-star hotel and conference centre, schools and a world-class hospital in Abuja.