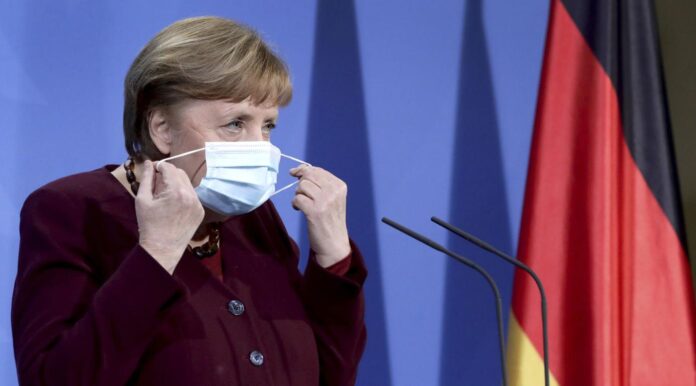 German leaders on Tuesday agreed to extend the country’s coronavirus lockdown until April 18 to contain new infections and tighten measures over the Easter holidays.

Chancellor Angela Merkel and the leaders of the country’s federal states reached agreement on the strict lockdown measures following 11 hours of talks on the country’s way forward in the pandemic.

The leaders agreed that public and private life should come to a virtual standstill over the long Easter holiday weekend from April 1, through 5.

Shops were to remain closed throughout, except for grocery stores and supermarkets, which would be allowed to be open on Saturday April 3.

People are urged to stay at home throughout those five days, leaders said in a statement.

Public gatherings were generally banned during that time, but COVID-19 testing and vaccination centres would remain open.

Easter services are largely to be held virtually, and private gatherings limited to five people from two households, not counting children up to the age of 14.

Merkel justified the new measures in view of the rapidly increasing number of infections.

“We have not yet been able to defeat the virus, it does not give up,” she said.

Merkel said the situation in Germany was quite serious, with the number of cases rising exponentially, increasing stress on hospital intensive care units and the spread of more contagious coronavirus variants.

She spoke of the vaccination situation in Germany as “a race.”

It was also agreed that once a seven-day incidence of more than 100 new infections per 100,000 inhabitants was registered, local government districts must further tighten lock down measures.

This would include some curfews, stricter contact restrictions or the obligation for people to get daily quick COVID-19 tests in areas where social distancing or consistent mask-wearing are difficult to keep up.

The talks were bogged down at one point because of major differences over the concept of socially distanced holidays, with several states wanting to allow people to take solitary holidays in vacation rentals, holiday homes, apartments, caravans and mobile homes.

But no agreement was reached.

The country has moved ahead with the first reopening this month, with hairdressers, florists and hardware stores permitted to unlock their doors in some areas.