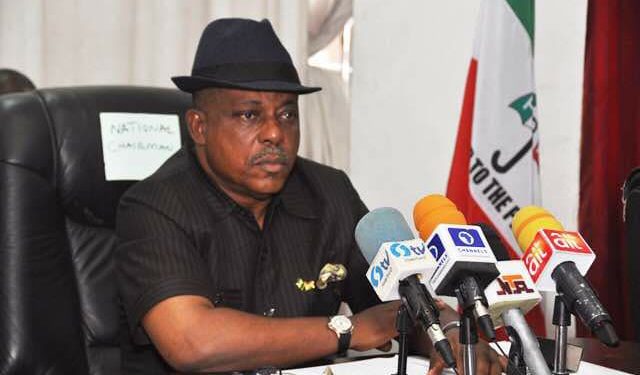 National Chairman of the Peoples Democratic Party (PDP), Uche Secondus, has said that Boko Haram insurgents have become confident under the administration of President Muhammadu Buhari.

Addressing a press conference in Abuja on Monday, Secondus said Buhari has failed to tackle the rising insecurity across the country.

The PDP chairman asserted that Buhari must live up to his responsibilities rather than “simply wishing that the problems will go away.”

Secondus said that Boko Haram insurgents who were pushed out to the fringes by the President Goodluck Jonathan administration, leading to the successful elections of 2015, have since boldly reasserted themselves.

He, however, noted that the PDP is willing to help address the security challenges, provided the Buhari administration is ready to approach the opposition for help.

He said: “It is unimaginable that terrorists, who had been pushed out to the fringes by the President Goodluck Jonathan administration, leading to the successful elections of 2015, have since boldly reasserted themselves and are now taking territories in five local governments of Niger state, which is only two hours from Abuja.

Nigeria has become an expansive field of mass kidnapping and murder under the watch of the APC-led federal government.

“The administration of President Buhari should completely shed weight on arrogance, lack of respect for Nigerians, and its pretences of being an island of integrity,” he said.

“He should begin to engage the citizens directly. He should address the nation on the various issues escalating tension in the land and pushing the nation farther to the tips of the precipice.

It is serious political malpractice, for Mr President to stand aloof, say nothing, do nothing and simply wish that the problems will somehow go away. It is a great disservice to the Nigerian people for Mr President to abandon his presidential duties to two media handlers who resort to issuing meaningless and annoying press statements in the name of an amorphous and questionable organisation called ‘the presidency’.”

He said: “In addition, efforts should be made towards partnership with foreign governments and miscellaneous entities for the war efforts. The situation in our country is not normal and exceptional steps should be taken to restore it to normalcy.

“We also call for the deployment of technology in the fight against terror, banditry, and other crimes. The PDP demands that all culprits should be brought to book. The apparent failure of intelligence to track attacks by bandits and follow up on them is a clear failure of the intelligence community.

“We call for the creation of National Borders Protection Force to secure our borders. This will include an integrated border protection system that will draw personnel and equipment from existing armed service and Immigration.”