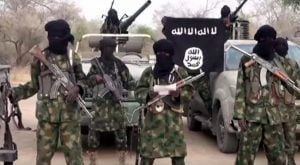 The Chairman of the Senate Committee on Army, Senator Ali Ndume has revealed that four soldiers were injured during a clash with Boko Haram terrorists in Monguno and other communities in Borno State.

The APC Borno South lawmaker said that the joint task force comprising soldiers, police and some civilian volunteers succeeded in killing all the terrorists in last Friday attack.

“A joint task force comprising the soldiers, police and the civilian JTF on Friday killed all the insurgents that came to attack monguno and other adjoining communities.

“I commend the military and other security agencies that contributed to the success of the operation.

“Unfortunately during the attack, about four soldiers sustained injuries while pursuing the insurgents.

“We encourage them to do more in order to bring the issue of insurgency under control.”

Ndume warned that if the federal government does not purchase new and adequate equipment for the military, then the war against Boko Haram won’t be won.

He revealed that most of the equipment being used by the military in prosecuting the Boko Haram war were refurbished and outdated weapons.

The lawmaker said that a lot was being expended on overhead of the Armed Forces but less to acquire new weapons and gadgets.

He said: “We are spending a lot of money on the Armed Forces but we are not spending enough on the procurement of modern equipment to fight the war.

“It is a different thing when we have a high personnel and overhead cost and a different scenario when you’re spending a little to acquire the necessary equipment, arms and ammunition.”