Benjamin Mendy charged with eight counts of rape and called a predator in court trial. 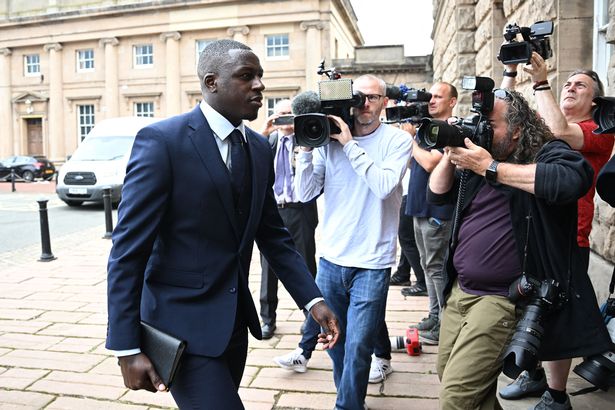 Manchester City defender Benjamin Mendy was described by prosecutors as a “predator” who could not take no for an answer as the trial began Monday of the French soccer player accused of eight counts of rape.

Mendy also has been accused of one count of attempted rape and one count of sexual assault. He is alleged to have committed the offenses against seven young women between October 2018 and August last year.

Timothy Cray, the lawyer for the prosecution, opened the trial at Chester Crown Court in northwest England by telling the jury: “The prosecution case is simple. It has little to do with football. Instead, we say, it is another chapter in a very old story – men who rape and sexually assault women, because they think they are powerful, and because they think they can get away with it.”

The alleged offenses span from July 2012 to August last year.

Cray said Saha was Mendy’s friend and fixer, and one of his jobs was “to find young women and to create the situations where those young women could be raped and sexually assaulted.”

“The acts that the defendants did together show callous indifference to the women they went after,” Cray told the court. “In their minds, and this could not be clearer, the stream of women they brought to their homes existed purely to be pursued for sex.”

The court heard how they said they had their mobile phones taken away, while some believed they were in locked rooms.

The jury was shown drone footage with aerial shots from above Mr Mendy’s gated mansion.

Two of the women said Mr Mendy raped them in locked rooms – an office and the main bedroom – the court heard.

The jury was shown video footage of a police officer demonstrating the locks on the doors, as Mr Cray explained they were legitimately used by wealthy individuals.

These had a special locking mechanism which created a “panic room” in case of burglary, which can only be opened from the inside.

“The point is that you have to know how to open them from the inside, and you’ll perhaps see how the witnesses might have gotten the impression that they are locked in,” Mr Cray continued.

Mr Cray told the court how the defendants said in “broad terms” that all the women consented to sex willingly, with only a couple of allegations where there is a denial that anything sexual happened.

“Everyone should have that basic choice, that basic dignity, the right to say ‘no’ to sex,” he said, “the fact they would not take ‘no’ for an answer” would be something the jurors will “hear time and time again.”

“You don’t lose that right because you’ve been to a bar or dressed for a nightclub or gone to a footballer’s house.”

The trial, expected to last over three months, continues.

“the fact they would not take ‘no’ for an answer” would be something the jurors will “hear time and time again.”