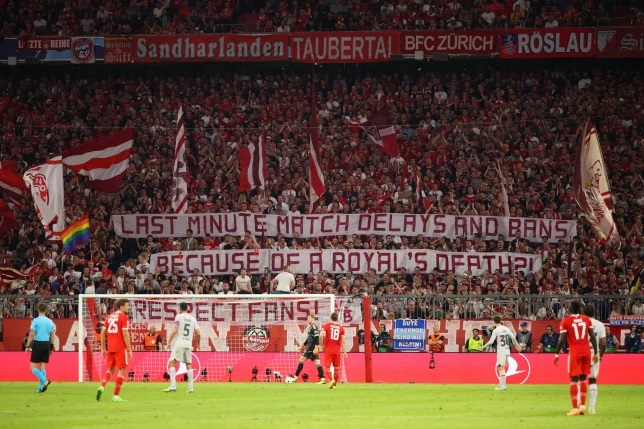 Bayern Munich supporters have protested against the impact the Queen’s death has had on football fans this week.

The banner which was unveiled during the first half of Bayern’s Champions League match against Barcelona on Tuesday evening read: ‘Last minute match delays and bans because of a royal’s death?! Respect fans!’

Rangers’ Champions League tie against Napoli has already been moved from Tuesday night to Wednesday evening due to limitations on police resources following the death of Queen Elizabeth II last Thursday.

Napoli fans are also banned from attending the match at Ibrox due to Scottish policing issues.

Naples’ municipal councillor Luigi Musto branded the decision to prevent Napoli fans from watching the game at Ibrox as ‘disgraceful’ and ‘unacceptable’.

‘I have expressed my total disdain over this decision. Hundreds of Napoli supporters have already bought flights, hotels and tickets for the match in Glasgow.

‘I can understand the decision to move the game 24 hours given the public order reasons stated by the local police forces in Scotland. But why would they close the away end? It’s totally unacceptable. Fans should not have to pay for these idiotic decisions.

‘SSC Napoli have already said they will refund tickets, but that is just a small proportion of the costs to supporters. Who will pay for the cancelled flights? The British Government? UEFA? And the Scots have the same problem for the game in Naples – a decision disguised as being at a ‘level playing field.’ It’s an absurd decision and a disgraceful one.

‘Already, I have been inundated with requests about. The fans are rightly furious. I will always defend the people of this city and I hope Napoli demand UEFA compensate the fans.’

Meanwhile, Liverpool supporters observed a moment of silence at Anfield before their Champions League tie against Ajax on Tuesday night.

Isolated shouts and boos were immediately hushed by the majority of supporters during the tribute.