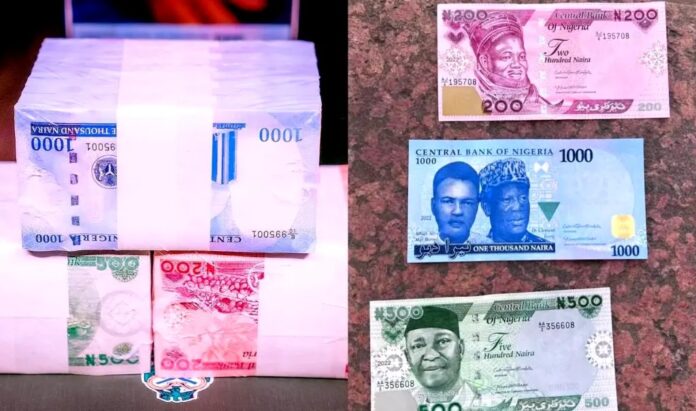 The Central Bank of Nigeria may be under pressure to extend the deadline for old naira notes to cease being legal tender as bankers and customers push for the extension.

The old notes are expected to be out of circulation by January 31 yet there is scarcity of the new notes as banks keep dispensing old notes to their customers.

Saturday PUNCH gathered that different stakeholders had been mounting pressure on the apex bank to extend the deadline in order to allow the new notes to circulate well and ensure the mop up of the old notes.

It was learnt that prominent among the stakeholders were managing directors of banks and their management teams, but a source close to the chief executive of a Tier-1 lender told one of our correspondents on Friday that the bank managing directors could not make the call for the deadline extension openly as the decision on the redesign of the naira had their approval.

The source stated, “It is tue that the bank MDs are not comfortable with the fact that the new notes are not circulating the way they had anticipated, but they can’t publicly ask for an extension of the deadline as they were part of the decision to redesign the currency and withdraw the old notes from circulation.

“However, because of the failure of the CBN to supply enough new notes and the pressure this is putting on their banks, the managing directors are lobbying the apex bank to consider the extension of the deadline through the backdoor via the auspices of the Bankers’ Committee. It is a sensitive issue.”

A senior CBN official on Friday confided in Saturday PUNCH that the apex bank might yield to the pressure for extension of the deadline.

According to him, a new date may be announced before or during the CBN Monetary Policy Committee meeting coming up on Wednesday, January 25, 2023.

He stated, “It is clear that the CBN has not supplied sufficient new currency notes to the banks. Even many of us in the CBN have not seen the new notes. The absence of the CBN governor has also clouded the issue and that is why no statement has been made regarding the extension of the deadline.

“From the look of things, most certainly, a new deadline may be announced before the end of the month or during the MPC meeting coming up between January 24 and 25.”

A bank manager in the Ikeja area of Lagos, who spoke on condition of anonymity because she was not authorised to talk to the media, stated, “We have been mandated to load all our machines with the redesigned naira notes, but we still don’t have much of the notes in circulation to load in all the machines across the country. What we have agreed is that at least one machine must be loaded in all locations with the new naira notes, because CBN officials have started moving around banks to confirm the level of compliance.

“Two of the CBN officials visited one of our branches today (Thursday) and asked questions if the bank ATMs were dispensing new notes; they also joined the custodians in the ATM room in loading the machines and confirmed that the new notes were being dispensed to customers; they went ahead to ask why some machines were still dispensing old notes and the response given was that the new notes supplied were not enough.

“They requested the evidence of cash supplied from our bullion team and ensured that the same was loaded in the ATMs as we have been mandated not to pay any single note across the counter.”

Similarly, the National President, Nigeria Union of Banks, Insurance and Financial Institutions Employees, Anthony Abakpa, stressed the need for the CBN to extend the deadline.

He said, “We would have loved for an extension on the deadline that the CBN has issued for those who are underprivileged and those who live in rural areas where there are no banks and they have to travel a distance before they can carry out banking transactions even on the PoS. We will also love it if they can extend it for every individual to be able to deposit their old notes.

“We advise that there should be a little extension like a month so that everybody can deposit the old notes.”

He noted that to a large extent, most of the Automated Teller Machines in Lagos had started dispensing new notes.

However, when one of our correspondents informed him that ATMs in Abuja were dispensing old notes, Abakpa described the situation as abnormal and said NUBIFIE should be notified about such banks so that necessary action could be taken.

A financial analyst and Managing Director, Cowry Asset Management, Johnson Chukwu, said banks were not overwhelmed with the new currency demand if the CBN had given them enough new currencies to disburse, adding that the apex bank had the number of banking customers.

He stated, “I don’t think the banks are overwhelmed with the demand if the CBN has given them enough new currency notes, the limits for withdrawal is only N500,000 per week per individual and N5m per organisation per week.

“So, the CBN has the number of bank customers; The basic thing I would have expected them to have done is to look at the history of the banking customers and see the people who are cash oriented and those who come to withdraw money.  Let’s assume you have 12 million bank customers or there about, and you take it that six million will come and withdraw cash and you assume that 50 per cent are individual customers and not corporate; calculate the figures and have an estimate on how cash will be demanded.

“If the CBN has actually released enough new currency notes to the banks, there is no reason why the banks should not be able to meet their customers’ demands.  If there is no queue at any bank where people want to withdraw the new notes, it simply means that people are served with the currencies given to the commercial banks by the CBN. If the banks don’t have, they will give them the old currency. So I think clearly it’s all about what’s available.”

Chukwu added that the volume of transactions done with cash had significantly dropped, adding that cash was no longer a significant standard of payment in the country.

“So, in as much as there may be some discomfort and challenges at the very rural areas, I don’t think it will cause any major hiccups in business transactions, because I don’t know anyone that is buying anything for N2m that will carry cash around unlike what we used to have in the past. Most Nigerians have moved to other means of payments that are more efficient. The shortage (of new notes) will not affect economic activities,” he said.

Unlike others, he noted that the deadline should not be extended.

He said, “No, I don’t think that the CBN should extend the deadline because, if you look at some of the motivations for that timeline, an extension will defeat some of those primary objectives. This is a new currency design and it will reduce the volume of cash that people can withdraw, so I don’t see the possibility of an extension.”

Speaking on how the apex bank should tackle the inadequate supply to commercial banks, he said, “I think it’s a design, not an accident; it’s clearly a design by the CBN to ensure that the volume of cash in circulation is checked.”