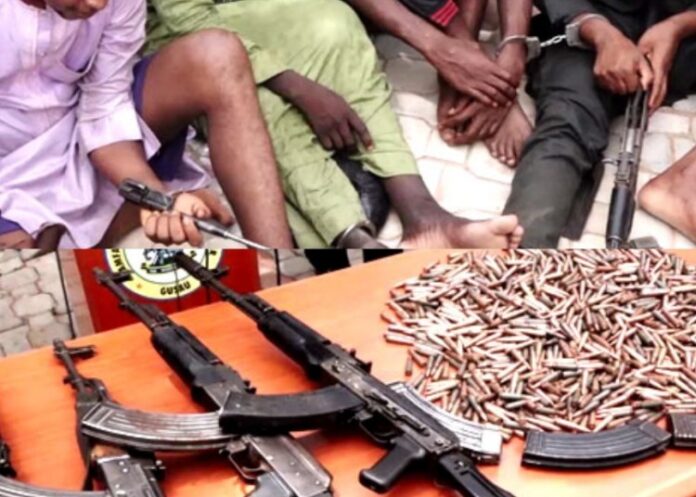 A Nigerien citizen, Shehu Ali Kachalla, has confessed that he has sold no fewer than 450 rifles to different criminal gangs across the North-West region.

The notorious gunrunner who disclosed that he had been in the business for more than three years was among the  five notorious suspects paraded by the Zamfara State Police Command for their alleged involvement in banditry, kidnapping, cattle rustling, and illegal possession of firearms.

The Police Public Relations Officer, arrest of the suspects was a result of the collaboration between the police and the state leadership of the Miyetti Allah Cattle Breeders Association of Nigeria (MACBAN).

He stated that the command would continue to work with any group or persons willing to work for the peace of Zamfara and the north-west region.

The PPRO assured the people of Zamfara that the command was working hard to ensure the state was free of all criminal activities.

Those arrested were said to have been terrorising various communities in Zamfara, Kaduna, Katsina states in the North-West, and Niger State in the North-Central part of the country. “The suspects were arrested through the efforts of the Federal Intelligence Investigation Bureau and Special Tactical Squad deployed by the Inspector General of Police to rid Zamfara and the North-West region of crime,” the statement read.

They were alleged to have kidnapped the younger brother of one Dr Dauda Lawal and confessed that they collected N20 million ransom, as well as received N10 million ransom for the abduction of the daughter of one Engineer Yahaya Maradun.

Abubakar Ali, another notorious kidnap suspect from Niger State, said he was operating within Kagarko and Chikun local government areas of Kaduna State.

He also confessed that he had been in the criminal business for three years and killed five of his victims who could not afford to pay ramson to regain freedom from captivity.

According to the suspect, their leader pays them between N600,000 and N700,000 for any abduction that attracts N20 million ransom and above