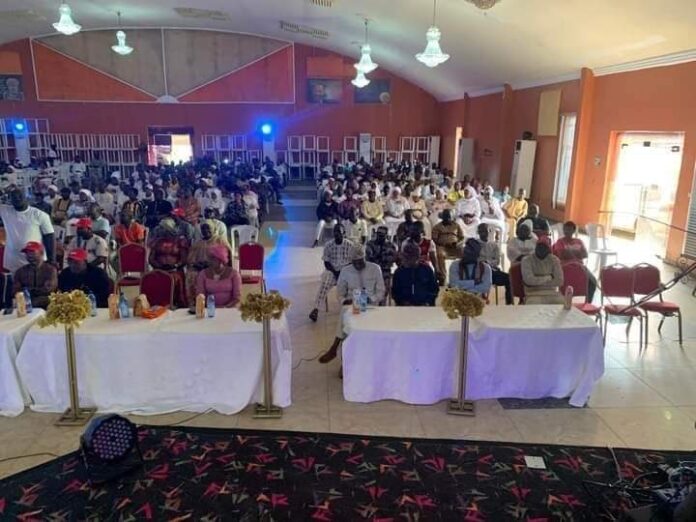 The Osun State chapter of the Atiku Support Organisation (ASO) was yesterday inaugurated in Osogbo, the state capital.

Members of the group were drawn from the thirty (30) local government and area office in the state. Both State and local executives were inaugurated in the presence of the zonal and national leadership of the organisation.

Speaking at the event, the State Coordinator, Comr Funmiso Babarinde said the history of Osun PDP success victory at the last poll will not be written without acknowledging roles played by Atiku Support Organisation on the House to House vigorous Campaign, supported by the National officers, Championed by the Zonal executives and which was executed by the Osun State executives and members.

His statement reads, “Three years ago a support group was birthed in Abuja called Atiku Support Organisation ASO this was after the Presidential election that robbed PDP of been in the Leadership of Nigeria at the Federal level.

“The vision and mission was clear and we acknowledged earlier enough that there is a lot of work to be done hence the critical stakeholders was tasked to put together a working structure that can deliver our Principal going forward. National Executives, Zonal Executives and State Coordinators was created to midwife the biggest, strongest and down to the units structure of members that will mobilise and work for the emergence of Our Principal His Excellency Alhaji Atiku Abubakar GCON former Vice President Federal Republic of Nigeria in PDP and subsequently in the coming 2023 Presidential Election.

“Difficult as the task was, the group Executives and members through dedication and dint of hard work was able to do so many mobilisation programs across the country for the party and our Principal from then till today that we are here and we are not relenting until Our Principal is pronounced as The President of the Federal Republic of Nigeria with his Vice President sworn in by God’s grace in 2023.

Babarinde however used the occasion of the inauguration and summit to congratulate the Governor-elect, Senator Ademola Adeleke and Osun PDP family. “Imole ti tan L’Osun.”

He said, “Today’s programme is about Unveiling the 15 members executives members in Our group structure across all the 31 LG Governments and Area Office and our Ward Coordinators in all the 332 wards in the state. I can confidently tell you that we have our members up to all the polling units in Osun State. Their data with us include their voting units to be very sure they have voting rights.

“This was put in place by ASO Osun Chapter according to the directives of the National body to help Our Presidential Candidate,Our Senatorial Candidates, Our House of Representative Candidates and Our House of Assembly Candidates in their various elections coming up next year February/March 2023 to be conducted by INEC.

“Campaigns and Mobilization would soon start and I sincerely hope ASO Osun members would be incorporated into the various campaign structures across the state and our constituencies by our great party and our Candidates. I can assure you that ASO is on ground and won’t dissapoint you. We are not a WhatsApp support group Organisations that abound. We promised Atiku will win Osun state with nothing less that 600 thousands votes. Mark my words. We are determined,Yes we can do it and we will do it.

“PDP is coming to Rescue Nigeria in 2023 at the Federal level and we will make Nigeria work for all citizens again.

Congratulating Osun PDP and members of the Atiku Support Organisation, the zonal coordinator, Hon. Akinsanya Abdul-Azeez, said the time to rescue Nigeria is now. He described the election that took place in Osun where Senator Ademola Adeleke was declared as an eye opener for subsequent elections, most especially 2023 general elections.

He said “I would like to congratulate the Governor-elect of Osun state, his deputy and the entire ASO Southwest family for our indispensable inputs towards ensuring that Osun regained its place of pride as the “land of virtue”. That notable feat wouldn’t have been achievable without the painstaking efforts of us all.

“Permit me to also convey to you the message from the national leadership of this frontline Organisation. It is a message that our contributions are well documented and the verdict of history would be kind to us all.

Abdul-Azeez commended the leadership dexterity of Comr. Funmiso Babarinde for his resilience and love for the party. “Special commendation goes to Hon. Babarinde Funmiso, the Osun state Coordinator for blazing the trail and creating a template worthy of emulation by all and sundry.