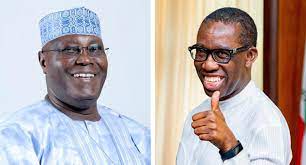 Atiku Abubakar, the Peoples Democratic Party’s (PDP) candidate, has visited with a number of governors and other players from the regions geopolitical zone North-East.

The Nation reports that Atiku received 25, 000 defectors from various political parties across the State at the Abubakar Tafawa Balewa Stadium Bauchi before the North East Consultative meeting.