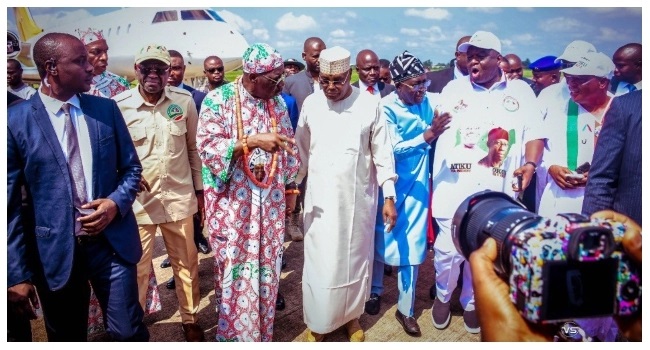 The presidential candidate of the Peoples Democratic Party (PDP) Atiku Abubakar and the chairman, Iyorcha Ayu have arrived in Edo State for his presidential campaign ahead of the 2023 general poll.

Atiku arrived at the Benin City Airport alongside members of the PDP presidential campaign council.

He was received at the airport by Governor Godwin Obaseki of Edo State and his deputy governor, Philip Shuaibu as well as top politicians, PDP officials, and members in the state.

On arrival, cheering supporters made up of women and youth groups rolled out drums to receive him as they chant his name in solidarity.

From the airport, Atiku and his entourage visited the palace of the Oba of Benin, his royal majesty, Oba Ewuare II (the second) who sought the blessings of the monarch for his ambition.

He said the monarch has a great role to play in providing leadership for the country.

Responding, the monarch assured Atiku of the prayers of his palace.

Atiku visited Edo despite security threats in the state. On Friday, a convoy of the General Overseer of Omega Fire Ministry, Apostle Johnson Suleiman was attacked by gunmen who killed six persons including security personnel attached to the cleric.

The Edo State Government on Friday said it uncovered plans by some persons to disrupt the presidential campaign rally.

A statement by the Secretary to the State Government, Osarodion Ogie said the government would ensure that those trying to disrupt the peace in the state are prosecuted in accordance with the law.