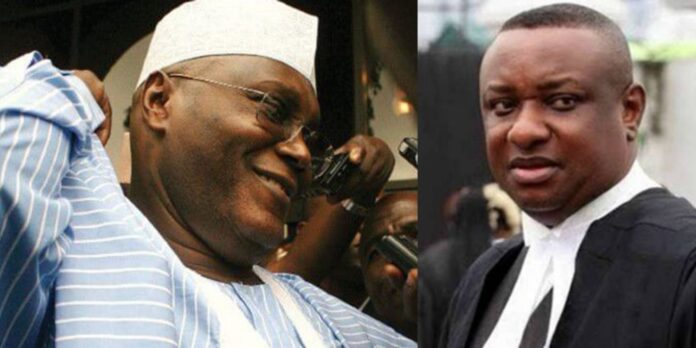 Spokesperson of the ruling All Progressives Congress (APC) Presidential Campaign Council for the 2023 elections, Festus Keyamo has said the decision of Atiku Abubakar, presidential candidate of the Peoples Democratic Party (PDP) to contest by ‘not respecting the zoning principle’ is one of the major reasons the opposition party is in crisis.

What Keyamo said: Keyamo, a Senior Advocate of Nigeria (SAN) who is the Minister of State for Labour and Employment, claimed that Bola Tinubu, the presidential candidate of the APC, in 2007 gave Atiku ‘a soft landing’ by handing the presidential ticket of the then Action Congress (AC) to him to contest the 2007 election.

Keyamo explained while speaking on a Twitter Space Programme organised recently by the ABAT (Asiwaju Bola Ahmed Tinubu) media team: “In 2007, Asiwaju decided to call on Atiku who had been thrown out of the PDP at that time because Olusegun Obasanjo ordered a re-registration of all PDP members because he wanted to wield out people like Atiku.

“And so when Atiku went back to his Jada ward, even as Vice-President, they refused to give him a membership card. That was how they threw Atiku out of the PDP. What happened? Asiwaju had already oiled the political machine called the AC at that time. He invited Atiku and gave him the ticket on a platter of gold.

“Asiwaju could have gone for President but he saw the mood of the nation because Obasanjo was just finishing his Presidency. So he knew that the presidency could not remain in the South. That’s a kind of nationalist, patriotic person that Asiwaju is.

“He decided to give Atiku the ticket, Atiku failed in 2007.

“At every point in time Asiwaju has put the nation before himself. He has never thought of himself. He bided his time and when the North had finished its eight years, that was what brought the popular phrase of Emilokan. He is not doing it as a matter of right, but he is just saying that, ‘I have paid my due’.”

The PDP crisis: For months, the PDP has been saddled with an internal crisis; with a camp loyal to Rivers State Governor, Nyesom Wike, who is demanding Iyorchia Ayu’s resignation as National Chairman to enable a replacement from the south of Nigeria to be appointed. That camp believes that is one of the ways of addressing the lopsidedness in the leadership of the party.