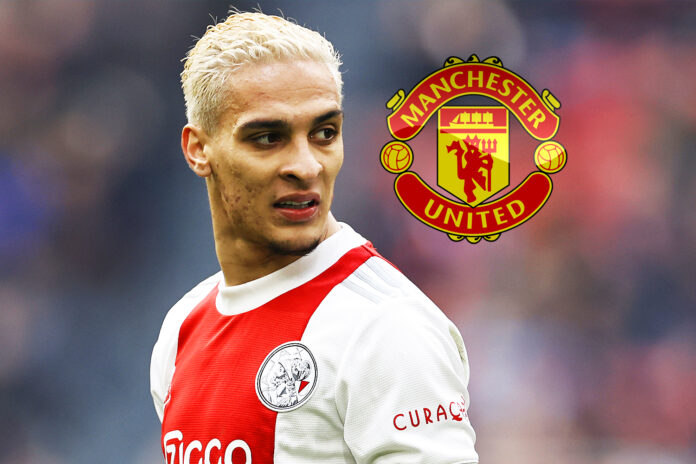 Manchester United target Antony refused to publicly commit himself to Ajax – just hours before going on strike in a bid to force through a €72.3millionmove to old Trafford.

The Brazilian international was asked if he could give fans of the Dutch club any guarantees that he will still be in Amsterdam when the transfer window closes at the end of the month.

He answered: “No, to be perfectly honest, I can’t. “What I can say is that I want to come to the right decision with my family, business partners and Ajax, which is good for everyone. “In the end, God determines my future. “I am very happy at Ajax, I have a contract until the summer of 2025 and I will give everything for this beautiful club for every second.’ I wear the shirt with pride and from day one I feel at home.

“If we all decide that I will stay here, then I know that this is the best thing for me and the club. It’s not like I have to leave.

“Now I am focusing on playing football and have put all other matters in the hands of my agents and my brother. They will advise me on what is best.”

Antony granted the interview to Dutch newspaper De Telegraaf just as United were tabling a bid that would see them pay £63.8million up front and a further £8.3million in add-ons.

Ajax immediately rejected the offer – and insisted that the 23-year-old is not for sale.

And when he reported for duty at his club’s De Toekomst training ground on Friday, he informed Alfred Schreuder that he wasn’t mentally prepared to train. Antony worked out in the gym while Schreuder put the rest of his squad through their paces in preparation for the clash at Sparta Rotterdam on Sunday.

Ajax refused to comment on claims that Antony had downed tools to engineer his departure from the club. But the Sao Paulo-born winger’s head has been turned by United’s interest and his advisers have flown into Amsterdam from South America in readiness for a deal to be done.

Antony admitted that it has been hard to see Ten Hag endure a baptism of fire at Old Trafford. The Dutchman is the first United boss in over a century to lose his first two games in charge.

And after a 2-1 opening day defeat by Brighton was followed by a 4-0 humiliation at Brentford, the Reds go into Monday night’s showpiece clash with Liverpool with their manager under the cosh.

Antony said: “Erik has been super important to me. I am grateful to him and wish him all the best. “I will always cheer for Erik after working so closely together. “I have not been able to celebrate or cheer for him as he got no points yet. I couldn’t until now anyway and that makes me sad. “But knowing Erik, I am convinced that he will turn the tide soon.“ Manchester United will improve at his hand. At his previous clubs he has proven that his method works.”

Ajax boss Schreuder must now decide whether to take his star player to Rotterdam – and Antony will be reluctant to further alienate Ajax’s fans while United weigh up the option of increasing their initial bid.

The Brazilian wants to ply his trade in the Premier League, but with the World Cup approaching he understands that playing for Ajax in the Champions League could become a major factor in whether he goes to Qatar.

Antony said: “I am grateful to God for every day that I am on the field “He has given me the opportunity in Europe, at Ajax, to realise my dream.