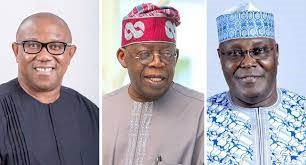 According to a recent poll, a third-party candidate is the most popular choice to succeed the current president of the most populous nation in Africa.

The previous state governor Peter Obi received a resounding majority of the respondents’ votes in the elections set for February. Premise Data Corp. conducted a survey for Bloomberg News, and the results were released on Wednesday, the first day of the official campaign to succeed President Muhammadu Buhari.

72% of the 92% of participants who indicated they had made up their minds about how to vote said Obi was their top option. 45% of those who are still unclear stated they would choose the 61-year-old as the candidate.

3,973 Nigerians were polled between September 5 and 20 by the data firm, which has its headquarters in San Francisco. The app-based poll’s respondents were chosen from quotas created by age, gender, and location among the nation’s six geographic zones. To ensure national representation, the results were then weighted in relation to the initial quotas. According to the Alliance for Affordable Internet, 44% of Nigerians have smartphones.

Less well-performing were the candidates of the two parties that have controlled Nigeria since democracy was restored in 1999. With 23% of voters still undecided and 16% of voters who had already made up their minds, Bola Tinubu of the ruling All Progressives Congress won. With 9% and 17% of the vote, Atiku Abubakar of the main opposition Peoples Democratic Party came in second.