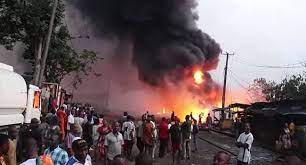 Residents of Kabba, an ancient town in the Kogi West Senatorial District, were gripped by  fear after an explosion hit the area.

The explosion was said to have occurred on Sunday night at a bear parlour joint opposite a police station.

Recall that the first explosion which generated controversies as to whether it was a bomb or a gas cylinder, occurred on May 11 at a beer parlour around Lewu Junction in Kabba Town.

That explosion claimed three lives out of the 16 persons affected. However, no casualty was reported but the building was massively damaged.

Police in the state confirmed the incident but said the investigation into its cause will commence soon.

The Command’s Public Relations Officer, William Aya, also disclosed that there was no casualty in the Sunday’s explosion.

The police spokesperson explained that the explosion happened at one Omofemi Bar at Okepadi Quarters, Kabba, around 9.15 pm on Sunday.