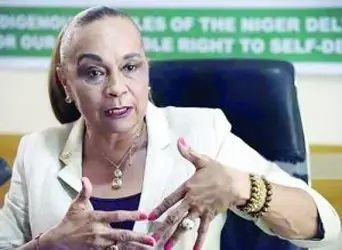 A rights activist, Annkio Briggs, has described the award of a multi-billion naira pipeline surveillance contract to a former leader of the Movement for the Emancipation of Niger Delta, Government Ekpemupolo, popularly known as Tompolo, as an attempt by the Nigerian government to pitch Ijaw nationalities against one another.

Briggs also said the controversial contract was awarded for some political parties to be able to garner votes in the Niger Delta ahead of the 2023 general elections but noted that the ploy wouldn’t manifest in the region.

She then called on her kinsmen and women in the Niger Delta to resist division and ensure that they don’t kill themselves for politicians over the contract and the forthcoming polls.

While speaking recently during an interview, the Niger Delta activist said the Federal Government should allow the region to control the oil and not award protection contracts to the indigenes.

“I must say that the Federal Government is using the award of contracts to divide the Ijaw nationalities. The government is instigating division among Ijaw people. Ijaw people have allowed the government to make us look as if we don’t know what we want. We want to know how much of our oil is being used to develop other parts of Nigeria.

“We gave strangers distributed all over Nigeria the power to protect the oil pipelines. This time, all politicians in all political parties must see that it’s not about giving contracts that will deliver votes for them. I want to call on Ijaw people and all other nationalities in the Niger Delta, to know that there is no reason for young men and women to expose themselves to death because of politics.

“If we own the resources, we must control them. The Federal Government knows exactly what it is doing when it makes it feel that it has awarded a contract to Tompolo or any other person in the Ijaw extraction to deliver votes for them for election. We are not prepared to do that again. Nobody should expect my people to come out and die willingly, and if there is anyone that will come out and die for politicians, then, they shouldn’t blame anyone,” Briggs warned.

On whether Tompolo has what it takes to protect the pipelines against oil theft, she said, “the Niger Delta people have demonstrated time and again their capacity to defend themselves and their rights and their capacity to defend the waters, creeks, seams, mangrove that are their natural habitats. As to whether the capacity is there to protect before Tompolo was given this contract, the second time round from their government that took it away from him, to others that are protecting it, we the Niger Delta know very well how the foreign ships come to load the oil.

“The stealing of crude oil is a technological use. We have a Joint Task Force that kills our people; local refineries that further destroy our environment; these people that are protecting are part of those stealing. The Navy has failed and they should leave our water. The navy and oil companies are part of the business of stealing oil.

“My people have the capacity to supply the demand of the Niger Delta people. The Federal Government doesn’t bring petrol and kerosene to some communities in Ijaw, it’s days and weeks to get petrol to other fishing ports. We will continue to call for self-determination and ownership of our resources. We lose about 1,000 barrels daily to oil theft and this can’t continue,” she said.

Recall that the chief executive officer of Nigerian National Petroleum Company Limited, Mele Kyari, while speaking at the 49th session of the state house briefing at the Presidential Villa, Abuja said the decision to award the contract to Tompolo was necessitated by the need for Nigeria to hire private contractors to man its oil pipeline network nationwide due to massive oil theft.

Kyari had argued that it was not the first time that individuals within the Niger Delta region were awarded contracts for pipeline surveillance. The surveillance contract is reportedly worth N48 billion per year (N4 billion per month).