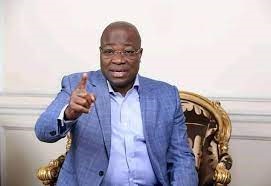 The governorship candidate of the Accord Party, Dr Akin Ogunbiyi has informed the leadership of the Peoples Democratic Party of his desire to return to the major opposition party in Osun State.

Ogunbiyi had exited PDP in the build up to the July 16 governorship election in the state and joined Accord where he was made the governorship candidate.

But barely two months after his electoral loss at the gubernatorial election, the business mogul has forwarded a letter to the National Chairman of the PDP, Dr Iyorcha Ayu, informing him of his readiness to return to the party.

It read, “I write to notify you of my return to the Peoples Democratic Party. My come back after a brief absence is to continue my contribution to the development of the party as I have always done in the party.

“Consequently, I hereby request for the restoration of all my rights and privileges as a member. Thank you for your kind consideration.”

When contacted on the telephone on Sunday, Ogunbiyi said he could neither confirm nor reject the letter and urged our correspondent to expect his statement on it on Monday.

“Yes, I can neither confirm nor reject the letter but I want to plead with you to wait till tomorrow (Monday) for my official statement on it,” he said.