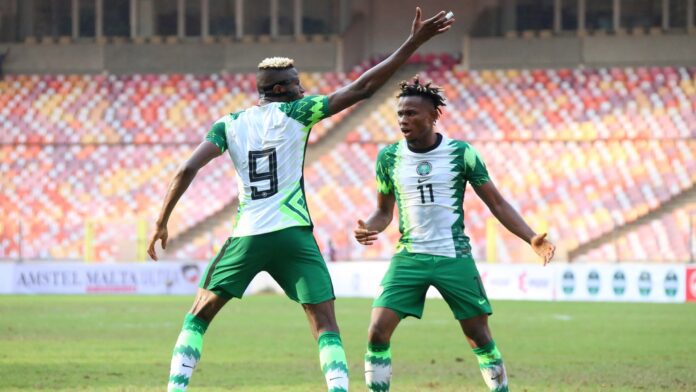 Nigeria demolished their Matchday 2 opponents, Sao Tome & Principe in the African Cup of Nations, AFCON, qualifiers to sit atop the Group A with an expected win.

Although Nigeria winning would not come as a shock, the surprise was the goal margin, as they put a record equalling (10) goals past The Falcons. The only time the Super Eagles have gone into double figures was a 10-1 victory over now Benin Republic more than six decades ago.

Victor Osimhen scored his first senior hat-trick and one more, Ademola Lookman and Terem Moffi got their first Super Eagles goal and it was simply a stroll in the park for Jose Peseiro’s men.

If the Super Eagles were imperious in the first half, the second turned out to be an annihilation. Seven goals killed whatever fighting spirit the island nation had left in them and now require nothing short of a miracle to qualify for their first continental competition.

Oghenekaro scored a spectacular free-kick and Emmanuel Dennis scored from the spot deep in stoppage time to get in on the act.

Osimhen leads the AFCON qualifiers goal-scoring chart with five goals in just two games. The next matchday is in September against Guinea Bissau.