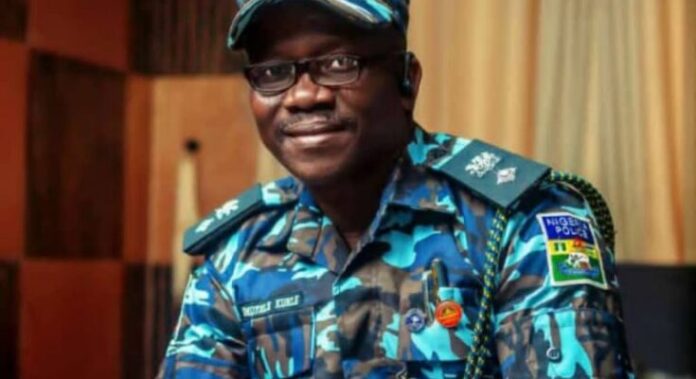 …as Police conduct autopsy on the corpses.

In the wake of the recent killing of two members of the same family in Ede, Osun State, Abideen and Kafayat Olalekan, the alleged killer cop and Chief Security Officer (CSO) to the Governor-elect, Senator Ademola Adeleke, CSP Omoyele Adekunle has confessed to the killing of one of the deceased.

Omoyele’s confession came on the heels of the intensive interrogations ordered by the Inspector General of Police, Usman Alkali Baba, into the matter in respect of the petition filed against the osun state Police Command by the bereaved family and other stakeholders, especially Civil Society Organisations.

It was authoritatively gathered that the prime suspect, CSP Omoyele Adekunle, who allegedly led the Police Squad to the scene of the incident, admitted that he only killed one person out of the two armless citizens confirmed dead same day. But the family is insisting that he was responsible for the killing of the two persons, including a pregnant woman on the instructions of a serving PDP lawmaker, who is the Minority leader of the Osun House of Assembly, Hon. Kofoworola Babajide Adewumi.

The Police had conducted autopsy tests on the deceased bodies to formally unravel the cause of their death for further investigations.

This is even as the bereaved family insisted that the culprits must be brought to justice to serve as deterrent to other erring officers, power-toxic individuals and those with the belief that they are above the law.

Recall that late Abideen Olalekan and Kafayat Olalekan were allegedly gruesomely murdered by policemen led by CSP Omoyele, on the orders of a lawmaker representing Ede-North State Constituency in the House of Assembly, Hon. Kofoworola Babajide.

It was reported that their killing was a fallout of the disagreement that ensued among members of the PDP over sharing of the left over of largesse of the recently conducted Osun governorship election.

However, in the quest for justice, the bereaved family through their lawyer petitioned the Osun Place Command and forwarded same to the Police Headquarters, Abuja, few days after the incident.

The family followed it up with appearance on Human Rights Radio (Berekete Family), Abuja, from where Force PRO in Abuja intervened and requested the family to show up at the Force Headquarters, Abuja, where the matter was already being investigated.

In what appears as a swift response to the petition, it was reliably gathered that the Inspector General of Police directed immediate investigation into the matter with an order to ensure justice is served and seen.

The action of the police authority led to the summon of the alleged killer cop and Adeleke’s CSO, Omoyele Adekunle and members of the family of the deceased.

The source who claimed anonymity informed that the alleged principal suspect, Omoyele admitted in the course of the investigation that he only shot and killed one of the deceased, Mr Abideen Olalekan

He further confessed that he was part of the Police Squad invited by Hon. Adewumi but not responsible for the killing of the other deceased, Mrs Kafayat Olalekan who was brutally killed same day few hours to the first killing though at different locations but same area in Ede.

Meanwhile, the Secret Investigative Squad of the Police Headquarters, Abuja, had on Sunday conducted postmortem exercise on the corpse at the Uniosun Teaching Hospital, Osogbo, with the expectations of revealing the results in few days to come.

Speaking on the development, the Counsel to the complainants, Barrister Bola Abimbola Ige, confirmed to the autopsy tests conducted on the two dead bodies.

According to him, the postmortem exercise was carried out by the Secret Investigative Team of Police Headquarters, Abuja on Sunday.

He said the autopsy will aid the investigation as to the quick determination of the matter.

“Police just conducted autopsy having gone through necessary investigations, by interrogating the principal suspect, CSP Omoyele and his colleagues, as well as the complainants.

“What actually led to this was that, on the 5th of August, 2022, the arms-triggered policemen on the invite of a lawmaker stormed the residence of the complainants where two persons were gruesome murdered in the process.

“The deceased are; Abideen Olalekan and Kafayat Olalekan. The act was perpetrated by a member of a team of police officers whose duty was to protect lives and property of the citizens.

“These arms-triggered policemen on the instructions of one Honourable Kofoworola Babajide Adewumi, the minority leader of the State House of Assembly, fired his gun first at Abideen Olalekan and killed him. The corpse was taken away, and thereafter went ahead in less than 24hours to kill Kafayat Olalekan, a member of the same family.

“The information got to my office through family of the deceased. They narrated the incident and how the deceased were killed. We took up the matter and petitioned the police detailing the information gathered, and this action led to the invite of the suspects and the complainants by the police authority. They were adequately interrogated in Abuja.

“The alleged Police officer, CSP Omoyele didn’t deny the killing but only said that he killed one person. He only admitted the killing of Abideen Olalekan. He said he wasn’t responsible for the killing of Kafayat Olalekan.

“The investigative team had come and conducted the postmortem on the dead bodies and I was a witness to how the exercise was being carried out.

“So far so good, the police have shown a dispassionate and readiness to look into the matter as it ought to be looked into and I am sure that at the end of the matter, the truth will be known and made to the public.

“We will go to any length to ensure that this gangsterism doesn’t go unpunished. Enough of public harassment and high-handedness on the part of the Police, we all knew all happened during EndSars, with what had happened in recent past, we must put a stop to this.

“Nigerians should not hesitate to complain any high-handedness on the part of the police. I urge them not to cover such cases, this is the only way to sanitize our society and rid of such heinous acts”, the legal expert added.

Speaking on behalf of the family earlier at the Uniosun Teaching Hospital, UTH where autopsy tests were carried out, a younger sister to the deceased, Mrs Rukayat Olalekan Olasoji said all that the family is seeking for is justice adding that “we don’t want this matter to be swept under the carpet.”

“We want justice on this matter because presently our lives are in danger, we are not saved anymore and we don’t want the family to be put to shame,” she screamed in tears.