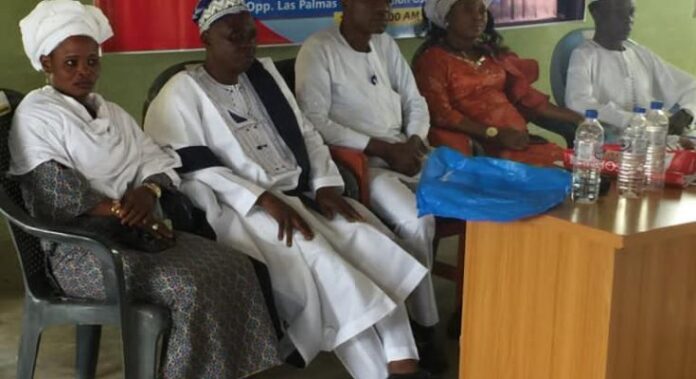 Osun state Chapter of the Action Alliance has elected new executive members with a mandate to work towards securing the gubernatorial seat of the state in the 2022 coming elections.

After the election, Comrade Adetunji Olubunmi emerged as the new chairman of the party, while Elder Dayo Odulana was elected as the secretary.

Other 16 executive members were also elected by the party members to work in with the chairman and the secretary for the progress and success of the party in the forthcoming elections in the state.

The newly elected. Chairman, Comrade Adetunji assured all party members that the newly executive members would work round the clock to becoming the leading party among other political parties in the state.

He said that the new executive members would improve on the existent formidable structures of the party to make it more virile and reckoned with in the next political dispensation in the state.

The Chairman who assured that, there was no cause for alarm in winning the next gubernatorial election in the state, maintained that, Action Alliance has quantum of political followers who are well versed in the country’s politics.

He described their template and plan of action for governance as unbeatable if compared to that of other political parties and charged lovers of democracy to always pitch their tents with Action Alliance party which forever stands as a party for hopeless ones in the country.

While appreciating, all members of the party for giving the new executive members, the mandate to steer the ship of the party, the party chairman promised not to let them down.

He said“ we are your servants and ambassadors and we are ready to work in togetherness with you to make the party a second to none among other political parties in the state. We will use our strength, bones, blood and water in our bodies to serve you wholeheartedly to ensure the party victory at the poll comes 2022 elections in the state.”

” We will go back to the drawing board where strategies are being mapped out and very soon,you will see us in the real practical of politics when we start applying the doctrinal principle of political jokers in the field of politics”.

Adetunji who specifically commended the pacesetting leadership role of the national Chairman of the party, Alhaji Adekunle Rufai in seeing that, disunity and segregation are discouraged in the party circle, charged all party members yo emulate his political fatherly style.

He described him as God sent to restructure the party and give it a more uplifting strength.

The Chairman further called on residents in Osun state and Nigeria at large, to get their Permanent Voter’s, PVC Card available saying that is the only power they can use to choose sensitive and listening leaders they deserved.

According to him, “The new executives in the state under my leadership will operate on the level ground with transparency and quality representation. I want to urge our party members to work harmoniously for progress of our party, Osun state and Nigeria at large.

Also, the party Secretary, Elder Dayo Odulana said that, the party has drawn a template that would take masses from callous government in the state.

Odulana noted that the membership is open to all good citizens across the state and that the present executive members of the party would operate an open door policy to allow all and sundry belong in the schemes of things.

In his own remark, the Chairman, planning Committee of the programme, Mr. Wale Alabi said,all necessary machineries had been put in place by the leadership of the party to make it more distinctive among other political parties in the state.

Mr. Alabi who added that, the Action Alliance (AA) as a party would ever remain an outstanding among others, described those in the party as men of impeccable pedigrees whose credentials stands unquestionable in the field of political.

He described them as progressive minded politicians who know their onions in the length and breadth of politics saying, they are harbingers of policy formulation with enviable track records in the political circle.

The planning committee Chairman while attributing the uniqueness of the party to cohesion and oneness, described the party members as real men who make things working as expected.

He however called on party members to cooperate with the newly elected party executives to be able to project the vision, mission and dreams of the party.

Mr. Alabi further warned them against anti- party activities which could cripple the progress of the party.