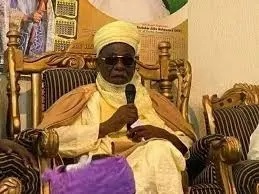 The former Emir of Zurmi in Zamfara State, Alhaji Abubakar Atiku has been reported dead.

According to reports, Abubakar Atiku passed on while receiving medical treatment in Egypt. The monarch was rushed to Egypt few days ago when his family members noticed that his health was deteriorating and needed urgent medication.

According to the family source, the monarch died last Friday.

The source explained that his remains would be taken back to his home in Zurmi Local Government Area of the State for burial according to Islamic tradition.

He was detained in the Government House for some months.

The Emir and two other monarchs were later charged to court by the State government due to pressure from Civil Society Organizations (CSOs).

They were granted bail by the court.