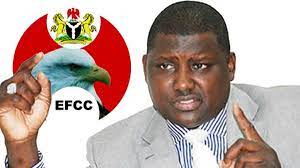 The Economic and Financial Crimes Commission (EFCC) has revealed the full list of money and properties owned by the former chairman of the now-defunct Pension Reformed Task Team, Abdulrasheed Maina.

It had been reported that Maina was sentenced to 61 years in jail on Monday by Justice Okon Abang of the Federal High Court sitting in Abuja.

In a terse judgement, Justice Abang ruled that Maina will spend only eight years in prison and the jail term is required to run concurrently, with effect from October 25, 2019.

The trial judge held that Maina is guilty of money laundering in the sum of over N2 billion, following vital evidence produced by the anti-graft agency to prove its case beyond a reasonable doubt.

Justice Abang ordered Maina and his firm to restitute about N2.1billion that was traced to their bank accounts, to the Federal Government, and the forfeiture of Maina’s properties in the country.

But in a statement released on Monday by its spokesman, Wilson Uwujaren, the EFCC said that huge sums of money were discovered in accounts linked to Maina coupled with several properties scattered all over Abuja and Dubai.

Below is a list of the assets owned by the former Pension boss and uncovered by the EFCC: