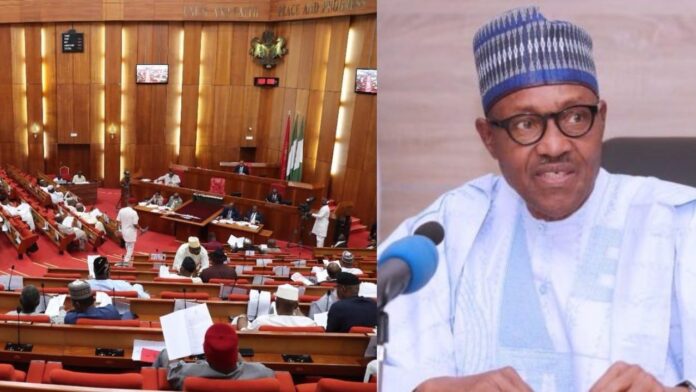 The Senate, on Wednesday approved President Muhammadu Buhari’s request to extend the  implementation period for the N18.12trillion 2022 budget to March 31, 2023.

President Muhammadu Buhari in a letter read yesterday by the President of the Senate, Senator Ahmad Lawan, seeking  for an amendment on the Act for extension of the implementation period.

Being an Executive Bill, it was sponsored by the Senate Leader, Senator Ibrahim Gobir, APC, Sokoto East.

Senator Gobir in his lead debate on the General principles of the bill said, ” The authorizing and operative clause in Section 12 is hereby amended by the deleting from the last line thereof the words “31st December, 2022” and substituting therefore the words “31st March, 2023”.

The budget  in line with provisions of clause 12 of the Appropriation Act and section  318 of the 1999 constitution which stipulates  12 calendar months for implementation of budget in any fiscal year, ought  to have ended on December 31, 2022 , having started on January 1, 2022.

President Buhari’s  letter read: ” I write to request your consideration for an amendment into the 2022 Acts expression clause 12,as passed and assented to.

“The  2022 Appropriation Acts states, in line with the provisions of section 318 of the constitution of the Federal Republic of Nigeria, this Bill  expires after 12 months starting from January, 1 to the December, 31, 2022, one assented to.

“The proposed 2022 appropriation supplementary budget submitted to National Assembly for consideration as well as recent 2022 capital releases to MDAs are likely to be utilized before December, 31st, 2022 due to the late release of the funds which will lapse if the capital implementation is not extended beyond December, 2022.

“In the light of the above, the National Assembly is requested to amend the 2022 Acts expression clause to reflect March 31, 2023 for the capital components only”.

Subsequently, the Senate  gave the request expeditious consideration and passage by making it pass the required legislative processes within 30 minutes.

In his remarks, the President of the Senate, Senator Ahmad Lawan said that extension given implementation period of the 2022 budget to March 31, 2023 would provide the required time for implementation of the N819.5billion 2022 Supplementary budget raised by the President .

Speaking on the request, Senator Muhammad Ali Ndume, APC, Borno South who called for caution in view of shortness of available time, said, “Mr President, my worry on this extension and supplementary budget is the reality of what we are doing.

” N819.5billion 2022 supplementary budget targeted for implementation during the extended period , should have been merged with the 2023’budget which will also be passed today.

“Is not possible for the N819.5billion supplementary budget implemented within 90 days from now .Let no deceive ourselves but if the Senate wants to go ahead , so be it.”

The Senate however went ahead with passage of extension of implementation period for 2022 budget.