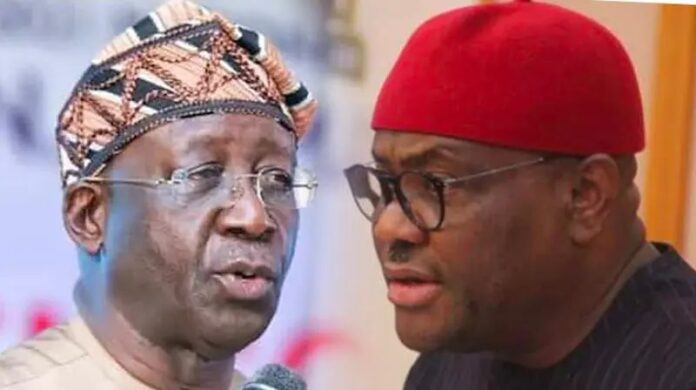 Nyesom Wike, the governor of Rivers State, claims that rent-seekers inside the PDP have thwarted his attempts to reach a peaceful conclusion to the crisis engulfing the party.

The governor, however, insisted that nobody can convince him to change his stance that the PDP should yield its national chairman position to Southern Nigeria.

Wike stated this when he hosted Cross River State PDP governorship, Senatorial, House of Representatives, House of Assembly candidates, and local government party chairmen, at his private residence in Rumueprikom on Wednesday night.

This was contained in a statement by Kelvin Ebiri, Special Assistant on Media to the governor and made available to newsmen on Thursday afternoon.

The governor said the clamour for the chairman of the PDP to be zoned to the South would persist until justice, fairness and equity prevail in the PDP.

Wike stated “This is the period that power game is being played. If you don’t have it now, forget it. If anybody tells you, let (Iyorchia) Ayu resign after an election is conducted, then you are a foolish person.

The governor disclosed that he has commenced full-blown politicking ahead of the 2023 general elections, adding that those who want to undermine him and his allies will be doing so at their own peril.

The governor, during the meeting which was attended by the party’s South-South National Vice Chairman, Chief Dan Orbih, explained that the seemingly intractable crisis in the party had lingered because some vested interests, whom he described as “hyenas and rent seekers,” have remained obstinate and averse to justice, fairness and equity in the party.

“Is Wike saying remove the vice presidential candidate? So, what are you begging me for? All I am saying, and I will continue to say is that you have taken president, give us (national) chairman.

Wike maintained that he cannot be convinced to support the current status quo, where the PDP presidential candidate, national chairman and the Director General of the presidential campaign council are all from the north.

According to him, refusal to cede the national chairman position to the South will be a recipe for crisis.

“He (national chairman) said, if the presidential candidate comes from the north, he will resign, which means he has had this in mind. Now, the thing has come to reality, now resign, no. And people are saying go and talk to Wike.

“You cannot have presidential candidate, national chairman, director general of the campaign,” the governor said.