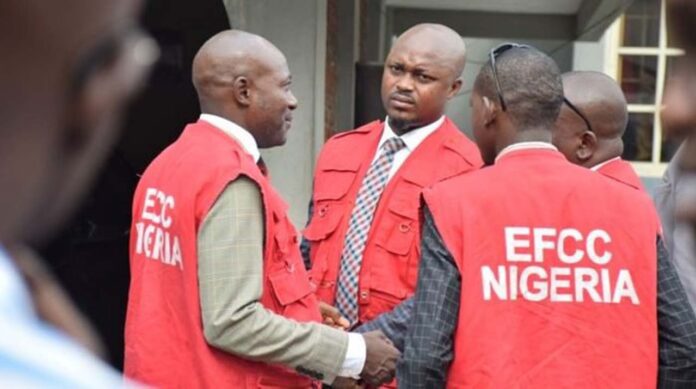 The scourge of corruption is one of the reasons why Nigeria is not
living up to its ‘Giant of Africa’ Shibboleth and has continued to
crawl on her knees in adult diapers to the chagrin of her countrymen
both at home and in the Diaspora. Since Independence, billions of
dollars has been lost to corruption according to the global
anti-corruption watch dog, Transparency International (TI).

On hindsight, it was commendable of former President Olusegun Obasanjo
to have established the Economic and Financial Crimes Commission
(EFCC) in 2003 to effectively tackle graft and corruption. That nearly
twenty year old vision has yielded fruits as the agency is making
sturdy strides in the gargantuan war against the malaise.

Corruption is too huge to be fought alone by the EFCC and we commend
the EFCC for forging strategic partnerships with other agencies in the
country to make corruption minimal. We recall during the heady days of
the sinister apartheid regime in South Africa that the liberation
fighters most notably Nelson Mandela, Thabo Mbeki, Desmond Tutu,
Winnie Mandela etc didn’t take the Boer regime headlong alone.

They sought collaboration among many nations like Nigeria, Ghana,
Zimbabwe, Kenya etc for financial, technical and ideological support.
Many South Africans in exile who were fighting the cause from abroad
successfully lobbied the then Margaret Thatcher led administration to
impose sanctions on the regime of the then Pieter Willem Botha led
government. Mbeki, then based in London played a key role in the
negotiations that led to the release of Mandela from incarceration
after 27 years behind bars. The American War of Independence from
Britain which led to the latter defeating the army of King George III
had the backing of France. Noble causes are never fought alone. This
piece will critically examine how the EFCC has partnered with Nigerian
agencies to wage war against the hydra headed monster of corruption.

The EFCC has gone into a partnership with the Nigerian Content
Development and Monitoring Board (NCDMB) in 2020 for speedy
investigation of infractions committed by oil companies in Nigeria.
This is a step in the right direction as the oil sector – the goose
that lays the golden egg for the Nigerian economy is bedeviled by many
irregularities allegedly committed by the big players in it especially
the International Oil Companies (IOC’s). Popular businessman and
politician, Barrister Jimoh Ibrahim told the world that he made his
fortune as a tax consultant to the Federal Government by ensuring the
government got billions of dollars in taxes from the IOC’s. Nigerians
deserve a better deal from the black gold and this partnership is
designed to bring home the bacon to the doorsteps of Nigerians.

In 2021, the EFCC and the Nigeria Extractive Industries Transparency
Initiative (NEITI) have gone into a partnership to ensure that the
revenues due to the government in the oil and gas sector is remitted
to the government and to also fight corruption in the sector. The
Vanguard Newspaper on April 23, reported that the EFCC Helmsman,
Abdulrasheed Bawa was quoted to have said when he received the NEITI
Boss at the EFCC’s Headquarters in Jabi Abuja where he said “We have
developed expertise in oil and gas investigation. We did oil subsidy
investigation, we did oil swap investigation, we did OML and OPL
investigations, which came with billions of naira recovered. We can
work together to ensure that what rightly belongs to Nigeria is ours”.

He urged the Agency to take advantage of the Extractive Industries
Fraud Section of the Commission, which was created exclusively to
tackle fraud in the extractive sector.

The Thisday Newspapers reported on December 16, 2020 that the EFCC and
the Department for State Services(DSS) have partnered to effectively
tackle graft in Nigeria. A statement issued by EFCC said the Ilorin
Zonal Head of the EFCC, Oseni Oluwasina Kazeem, made the disclosure
Tuesday while playing host to the State Director, DSS, Patrick
Ikenweine, at the commission’s office in Ilorin.

Kazeem, who decried the rate at which corruption had permeated every
sector of Nigeria system noted that the cankerworm could only be tamed
through collaborative efforts of all stakeholders, including the DSS.
He commended the DSS for being a good partner in the fight and called
for more robust working relationship between the two agencies.
Earlier, the Director DSS, Ikenweine stated the essence of his visit
which he said was to familiarise with critical stakeholders in the
State.

“I’m here to familiarise with you in a bid towards building on the
existing cordial relationship with your agency.

“The DSS and EFCC have a record of good working relationship, which I
hope should be sustained,” he said.

The EFCC and the Federal Inland Revenue Service (FIRS) went into a
partnership during the Chairmanship of Babatunde Fowler to fight tax
evasion in the country. This collaboration, according to the FIRS
Executive Chairman, Tunde Fowler, will ensure Nigeria’s financial
security and independence, which he said are key to national
development.

Fowler made this known in Abuja at the opening of International
Conference and Capacity Building Workshop on the Use of Beneficial
Ownership Information and The Recovery of Assets in Africa. He
beckoned on Nigerians and the international community to collaborate
in the fight against “any illegality”.

“Corruption is anything illegal. Whether it is money laundering, tax
fraud, tax evasion or other illegalities. We must collaborate to fight
them. When you are fighting corruption, you are taking back from the
corrupt people, what they erroneously think belongs to them. That is
why they resist the fight against corruption”, Fowler said.

The EFCC and the Presidential Artisanal Gold Mining Development
Initiative (PAGMI) on August 3, 2021 reiterated the need for
continuous education and enlightenment of artisanal gold miners and
gold sellers in view of their vulnerability in being used to
perpetrate sinister acts of money laundering.

A few days ago the EFCC encouraged the members of the National Youth
Service Corps (NYSC) to embrace financial crimes in the country. “Add
your voice to mine, because the fight against economic and financial
crimes involves you and I. I will play my part, you will play yours.”
The EFCC chairman stated this in a sensitization lecture on the Role
of Youth in Curbing Cybercrimes presented on his behalf by officials
of the Commission at various Orientation camps of the Batch B stream 1
set of corps members.

“Embrace hard work and shun crime, Yahoo-Yahoo is not a sustainable
way of life. As dynamic young men and women, our desire is to harness
your intelligence and energy for greater public good in your areas of
primary assignments”, Mr. Bawa said.

The EFCC is extremely pragmatic in its strategic partnerships with
other Nigerian agencies as they cannot win the anti-corruption war
alone. We urge the EFCC to forge more partnerships especially with the
media, religious bodies and the Civil Rights groups as the
collaborative efforts will greatly reduce the scourge of graft and set
Nigeria on the path to greatness which may dwarf the achievements of
the Asian Tigers.