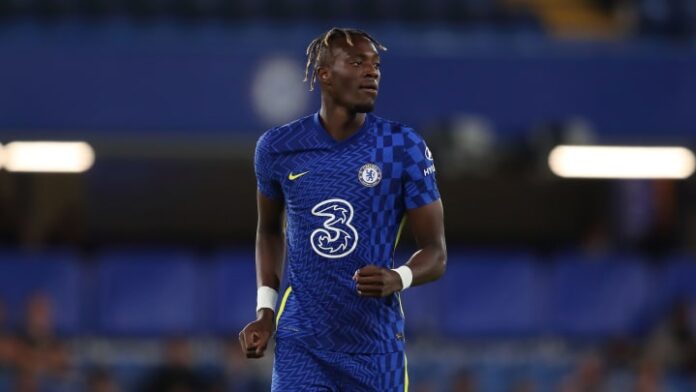 Tammy Abraham has completed his move to Serie A side AS Roma for a fee of £34m and will now work with former Chelsea coach, Jose Mourinho.

Abraham was not able to hold down a starting position after Chelsea parted ways with Frank Lampard who had faith in the striker.

He joined Chelsea academy at Under-8 level, rose through the ranks and got his senior debut in 2016. During his time with the club, he went on loan spells to other English clubs, including Bristol City, Swansea City and Aston Villa where he did enough to convince Lampard to hand him the number one marksman job for the club.

Excluding penalties, Abraham was the Blues’ highest scorer in all competitions for the second season running in 2020/21, and no-one netted more times in the Premier League from open play for the club. The majority of those goals came in the first half of the campaign, before a troublesome injury and increased competition for places reduced his opportunities.

A statement on AS Roma’s website confirming Abraham joining the club reads, “Abraham, 23, joins the club from Premier League side Chelsea – with whom he won the Champions League earlier this year – for a fee of €40 million.

“The overall transfer agreement also includes a number of performance-related clauses, based on the achievements of both the player and the club. Chelsea will also retain the right to a percentage of any future transfer fee involving the striker.

“Abraham, meanwhile, has put pen-to-paper on a five-year contract with the club that runs until 30 June 2026.

The England international leaves as Chelsea has also completed the signing of Romelu Lukaku. He scored a total of 30 goals in 82 games in all competitions.

“You can sense when a club really wants you – and Roma made their interest clear immediately,” Abraham told AS Roma website.

“Roma is a club that deserves to be fighting for titles and trophies. I’ve had the experience of winning major trophies and I want to be in those competitions again – so I want to help this team to achieve that and get to the level where Roma should be.

“It’s a massive honour to be the No. 9 at this club and I just can’t wait to get started and to help the team.”

He becomes the club’s fourth signing of the summer, following in the footsteps of Rui Patricio, Eldor Shomurodov and Matias Vina.

Read the original article on Vanguard.