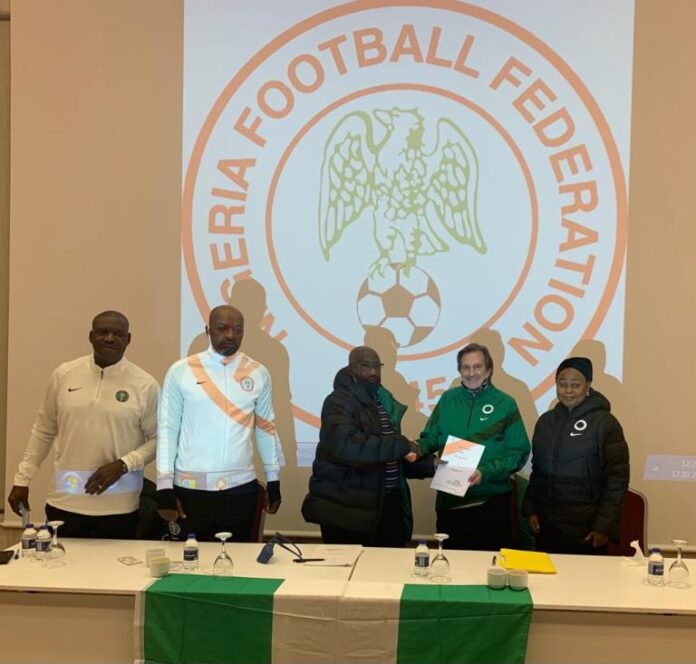 The Nigeria Football Federation (NFF) has reiterated its resolve and determination to provide the new head coach of the Super Falcons, Mr Randy Waldrum, all the support he needs to build a fabulous squad that will challenge for global laurels and ink Nigeria’s name on the map of the world’s leading women football-playing nations.

“I welcome you to the NFF headquarters for the very first time.

“Let me start by saying that I was actually impressed with your professionalism and competence shown in handling the squad at the Turkish Women’s Tournament, and that played a great role in the Super Falcons winning all their matches at the tournament.

“Permit me to also say the NFF is enamoured by your request, without any prompting, to come and watch the NWFL Super 6 taking place in Ijebu-Ode, Ogun State.

“This shows clearly that you are interested in the development and sustenance of the Nigeria women’s game and discovering players for the national team.

“We will continue to give you all the support to build a formidable team that the world will reckon with by its performance at major tournaments outside the African continent,” Dr Sanusi said.

Waldrum, an American who played as a midfielder and has worked largely within the American women football circle, was Head Coach of the Trinidad and Tobago national team between 2014 and 2016.

On his appointment in October last year, President of the NFF, Amaju Pinnick stated: “The predominance of the Super Falcons on the African continent has never been in doubt, with nine titles out of 11 editions of the Women AFCON competitions held so far.

“We envision a new Super Falcons squad competing favourably for laurels at the global level, and I believe the new technical crew led by Mr. Waldrum can take us to that level.”

Chairman of the NFF Technical and Development Committee, Alh. Yusuf Ahmed Fresh made a similar statement on Monday, saying the Federation has implicit confidence in Mr Waldrum to upgrade the technical hue of the Super Falcons and mould them into one of the world’s best.