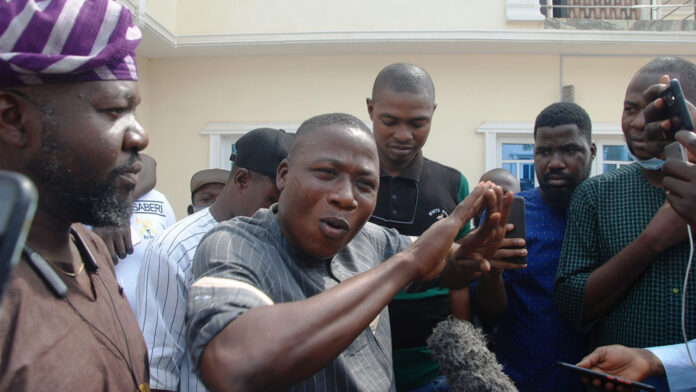 According to him, the South-Western states are no longer a part of Nigeria.

He made the declaration during a conference in Ibadan, Oyo state, insisting that it was high time the Yoruba became a sovereign nation.

With the declaration, the activist called on Yorubas who are resident in Hausa/Fulani or Igbo territory, to return home before war breaks out.

He said that all traditional rulers in Yoruba land must support the movement to free the South-west from slavery or they will not ‘see the light of the next day.’

“As it stands now, we are no longer under Nigeria. If they don’t intervene, it will go beyond control. We have gone beyond the point where we keep quiet; we are no longer scared to voice out.

“We are not safe anywhere, we can’t sleep in peace, we can’t travel in peace, what have we done? Are we slaves? We don’t do wrong by existing, we only chose the wrong leaders and we are saying enough is enough!

“Tincan in Lagos, Apapa, the directors are Fulani men. The two ports we have, the controllers are Fulanis. We don’t want them anymore!

“The borders that Nigerian Government closed, we are opening it all, we are no longer interested in being part of Nigeria!

“All our Kings are solidly behind us, any of them that want to deny it should make a press conference, let’s see.

“Start coming home, it is time! We have suffered enough, let’s not fight among each other, let’s unite for a common cause, it is time to come home. That’s all I have to say.”

Sunday Igboho started his activism by declaring that all killer-herdsmen must be evicted from Yorubaland.

Igboho attempted to evict the Fulani in the area when he gathered hundreds of his supporters, stormed the community and confronted the Seriki Fulani.

Since then, Igboho has been canvassing and campaigning for a sovereign state for the Yoruba, insisting that Nigeria is no longer inhabitable and accusing the Fulani of turning his people into slaves.