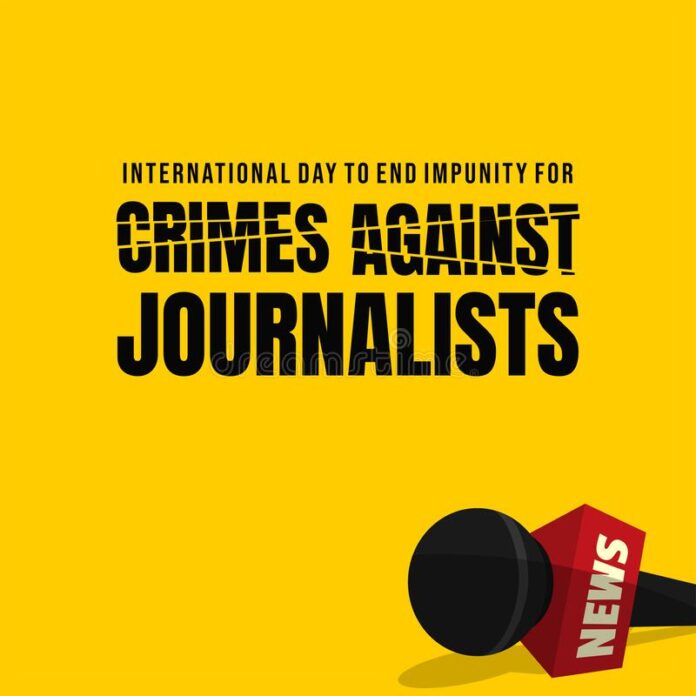 The common theme running through this year’s International Day to End Impunity for Crimes against Journalists (IDEI) messages from IFEX members on the African continent was the rise of brutal attacks on journalists and the growing culture of impunity.

While pointing out that there have been more than 15 incidents of physical assaults on journalists and media professionals in The Gambia in the last five years, the Gambia Press Union (GPU) noted that not a single perpetrator has been prosecuted for these crimes.

The Media Foundation for West Africa (MFWA) prefaced their IDEI statement with a message to family members, saying: “our hearts go out in genuine sympathy with the relatives, friends and colleagues of journalists murdered in the line of duty or for their work, and wish those surviving traumatic conditions complete recovery.”

The MFWA went on to highlight the unresolved attacks and killings of journalists across West Africa, citing the kidnapping of Oliver Dubois in Mali, the killing of seven journalists in Nigeria and two Spanish nationals in Burkina Faso, and the murder of Ahmed Hussein Suale in Ghana.

Ayode Longe, the executive director of Media Rights Agenda (MRA) in Nigeria, challenged the government: “to cite any attack on journalists or the media that it has seriously investigated and share with the public the outcome of any such investigation, including details of those arrested and prosecuted for the offence.” He proposed that “governments at all levels fulfill their obligations to ensure the safety of journalists by investigating all attacks against media practitioners as well as prosecuting and punishing the perpetrators of such attacks.”

Longe said that MRA’s monitoring showed that the police were major perpetrators of attacks against journalists, and that “it was ironic that the Nigerian police and other law enforcement and security agents that Nigerians should be relying on to protect journalists and the media from attacks by political thugs and other bad actors are themselves the worst culprits.”

The headline event in the southern African region was the dual commemoration of IDEI 2022 and the 10th anniversary of the UN Plan of Action On the Safety of Journalists and the Issue of Impunity, which was held in Zimbabwe on 11-12 November. Delegates from as far as Somalia attended the event, which was convened by the Media Institute of Southern Africa (MISA), UNESCO, and the Zimbabwean government.

In his opening remarks, Father Barnabas Simatende – a member of MISA’s regional council – said that the “media workers’ job is to shine a light in dark areas and hold people to account.” Subsequently, “such attacks on journalists – which often go unpunished – are not only a risk to journalists but also pose a risk to the democracies that we are trying so hard to build.”
Deteriorating media environment in DRC

The chilling annual report released by Journaliste en Danger (JED) in the Democratic Republic of Congo on 2 November 2022 is reflective of the deteriorating media environment in the country.

This situation is further exacerbated by the upsurge in militant attacks, and as JED secretary-general Tshivis Tshivuadi explained: “Ever since hostilities resumed between the Congolese army and M23 rebels in the east of the country, the authorities have not hidden their desire to muzzle free and independent media, accusing them of playing into the enemy’s hands.”

Just a few days before IDEI, over 20 journalists took refuge at the Kiwanja headquarters of the United Nations mission, known as MONUSCO, following threats by M23 to kill local journalists. A few days later the journalists were evacuated to Goma – the capital city of North Kivu.

The denial of accreditation and subsequent expulsion of veteran French journalist Sonia Rolley earlier in the month, by authorities, is another example of the deteriorating media environment and risky security situation in the country.

The Radio France Internationale (RFI) correspondent was “allowed to enter the country on a courtesy visa in September to cover a climate conference” and “was promised accreditation as Reuters bureau chief in the DRC. She had even “obtained written confirmations that her accreditation was in the works,” according to Reporters Without Borders (RSF).

Upon responding to a summons from the General Directorate for Migration, Rolley was informed that her visa had been rescinded, after which she was taken to the airport, put on a flight out and handed her passport on arrival in Paris.

Human Rights Watch (HRW) reports that “before being put on a flight to Paris, Rolley learned that she was being expelled because of her past journalism work.”
The Internet Governance Forum paradox

The Internet Governance Forum (IGF) is a multi-stakeholder forum for dialogue on public policy issues related to key elements of Internet governance. Since its first meeting, in 2006, the IGF has been convened annually by the United Nations Secretary General.

As a platform for discussions, the IGF is intended to facilitate a common understanding of how to maximize internet opportunities and address risks and challenges.

Vibrant discussions at this year’s forum, hosted in Addis Ababa, Ethiopia, were tainted by the fact that over six million people in Tigray have been cut off from the online community for the last two years. Prime Minister Abiy Ahmid’s remarks at the official opening of the IGF failed to acknowledge that his country holds the record for the longest internet shutdown in history.

AccessNow used the #IGF2022 as a platform to launch its petition, pressuring the African Union to ensure the government restore internet to the Tigray region. However, when asked for a date on when internet access would be restored, Ethiopia’s Minister for Innovation and Technology Belete Molla would not commit to a timeline. His response: “the government of Ethiopia is designing a package that is not only about internet resumption but the resumption of everything, because this is what we need as a people, as a government.”
In brief

Liberian investigative journalist Bettie Johnson has been shortlisted for the RSF Prize for Independence, for her persistent reporting on corruption and for refusing to accept lucrative offers meant to silence her.

Malian journalist Adama Dramé, who was forced into exile over his unrelenting investigation about the disappearance of reporter Birama Touré, has been shortlisted for the Impact Award. Finalists will be announced on 12 December.

African artists and human rights defenders came together virtually during a four-day closed meeting titled “Artistic Freedom in Africa: Challenges and Opportunities”. The gathering between PEN America’s Artists at Risk Connection (ARC) and the Southern African Human Rights Defenders Network (SouthernDefenders) created a space to discuss how “artists who push back, critique the status quo, or explore themes deemed social taboos are regularly targeted and forced to make the impossible choice between continuing their work in forced exile or remaining silent within their own communities.”

Rwanda-based journalist Floriane Irangabiye has been detained for over two months in her home country of Burundi, without being formally charged. According to CPJ, Irangabiye is a commentator and debate programme host on Radio Igicaniro – a Rwanda-based outlet that publishes critical commentary and debate on Burundian politics and culture. Irangabiye was taken into custody by military personnel in mid-August while she was travelling from Rwanda to Burundi to visit her family. CPJ reports that “at least one intelligence officer sexually assaulted Irangabiye while she was detained at the intelligence headquarters, by groping her buttocks and breasts.”

Media freedom advocates and journalists in Senegal have condemned the arrest, detention and ensuing prosecution of fellow journalist Pape Alé Niang – the director of the privately-owned news website, DakarMatin. Along with the MFWA, they are calling on authorities to release Niang and drop all charges against him.

Ahead of Nigeria’s 2023 elections, the International Press Centre (IPC) carried out a training programme for women journalists, so they can “deliver impactful, public-interest and investigative reporting of the electoral process.”