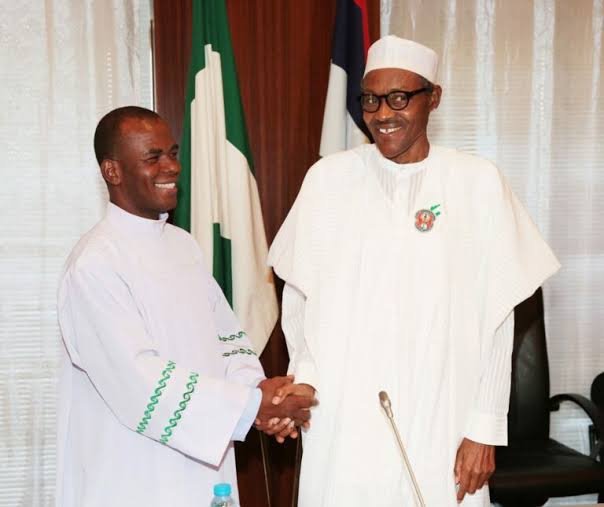 The Spiritual Director of Adoration Ministry, Enugu, Rev. Fr. Ejike Mbaka has finally reacted to the presidency claim that he begged for a contract from President Muhammadu Buhari.

The presidency had alleged that Mbaka is speaking out against President Muhammadu Buhari because he was snubbed when he requested contracts for some people as compensation for his support to the president.

Mbaka described the allegation as laughable,m and warned the presidency not to speak against him as anyone who does so, speaks against God.

According to him, the presidency lied as those he took to the president didn’t ask for contracts but wanted to help Nigeria in the fight against insurgents and terrorists.

Mbaka before 2015 election had supported Buhari’s presidential ambition and claimed God revealed to him that President Buhari would be a savior for Nigeria, he however made a u-turn on Thursday where he asked Buhari to resign or be impeached as insecurity worsens in the country.

Garba Shehu said Mbaka turned against Buhari because he didn’t get some contracts he requested for.

However reacting to the allegations from the presidency, Mbaka said there is no truth in what Shehu told the public.

He also lambasted Shehu, describing him as a shame to himself and those he represents.

Mbaka further revealed that he pays direct salary to about 23,000 people on a monthly basis, therefore he doesn’t need any monetary reward from the government.

“When they talk about giving Fr Mbaka contracts, I don’t want to talk about that because it is a laughable, childish accusation.

“Whoever is saying that is a shame to himself and shame to the people he is representing.

“Fr Mbaka’s voice came from the spiritual, so what I am saying is unchallengeable. I have been silent because I was waiting for them to change until God said ‘speak’.

“The Fr Mbaka who was speaking is not just a priest but by the special grace of God a job provider. To the glory of God, those benefitting directly from me monthly through direct salary are not less than 23,000 people.

“That person challenging Fr Mbaka, how many people are you feeding? So if I talk you talk? Because the government is paying you?

“I’m not here to defend any allegation, but the three men he mentioned are people that could have handled the nation’s insecurity. This was during Buhari’s first term and these men told them they can help conquer insecurity.

“These men had the platform to end insecurity within one month. This was under Abba Kyari. I just handed them over to government.

“They only asked me to help them reach government and offered to help insecurity, revive the nation’s economy through putting an end to theft of crude oil and providing employment.

Anyone who says the truth is branded a terrorist.

“Are those given contracts better than me? They have shown that they don’t have a reward mechanism. “The last person this administration should fight is Fr Mbaka.”