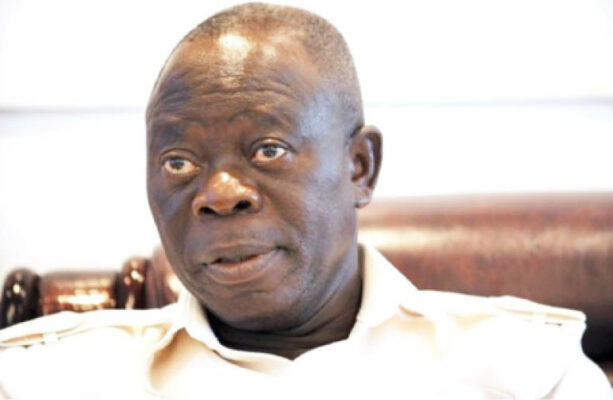 Former National Chairman of the All Progressives Congress, Comrade Adams Oshiomhole, on Friday urged members of the party to begin mobilisation for next year’s election, noting that staying united was the only way its presidential candidate, Bola Tinubu, and others can win next year’s election.

The former two-time governor of Edo State, at a stakeholders meeting in Benin debunked claim that he has endorsed a candidate for the 2024 governorship election in the state, stating that he has learnt his lesson.

Oshiomhole, the APC Senatorial candidate in Edo North, said that party leaders in the local government have an important role to play in the forthcoming elections, appealing to them to go to their various local governments, hold meeting and sell their candidates to electorates at the grass root.

He also called on aggrieved members to take a cue from him when he was ousted as the chairman of the party after serving for two years.

He said, “The primaries are over and the candidates have emerged. We need to put away our differences that came at the primaries and queue behind our candidates, beginning from our presidential candidate, Bola Tinubu, for two-time Governor of Lagos and the party’s national leader.

“The aggrieved members of the should learn from my act of political tolerance when I was ousted from office as the national chairman of the party. I had the opportunity to seek in redress, which would have stalled the party’s congress, but I didn’t.

“I have not endorsed anybody for the governorship election and I will not be doing so. I have learnt from my mistakes. I have also not ask anyone to step down or asked anyone to step up. The only person I asked to step down was my younger brother and this is because two Oshiomhole cannot be on the ballot.

“In the past, when I asked people to step down, they did and never forgave me, while the ones that stepped up have not done anything to show for the faith responded in them.”

While speaking on the party’s Muslim-Muslim ticket, he urged Nigerians not to be deceived by what other presidential candidates from other parties are saying, noting Tinubu is a tolerant Nigerian who has no ambition of making Nigeria an Islamic country.

Oshiomhole said, “We should explain to people about the APC ticket because there has been deliberate misinformation and an attempt to make the debate personal instead of issue-based.

“The issue is that we should vote a person that will develop the country. Those dwelling on the Muslim-Muslim ticket are doing so to distract people from the major issues. If they ask for your vote ask them to show you what they have done to deserve your vote.

“Tinubu did not make Islam mandatory for his wife who is a Senator and a pastor. His children are also Christians and Muslims. Is there a better example of religion tolerance?