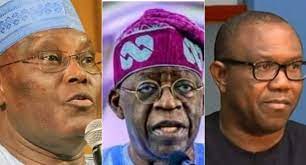 The Center for Reforms and Public Advocacy on Saturday disclosed that the new Electoral Act 2022 prevents political parties from withdrawing running mates.

The admonition comes in the wake of some political parties submitting the names of surrogates to the Independent National Electoral Commission while shopping for sellable candidates.

While the All Progressives Congress opted for Masari as a placeholder for Tinubu, Labour Party settles for former presidential spokesperson, Dr Doyin Okupe, for its flagbearer, Peter Obi.

The New Nigeria Peoples Party, on the other hand, settled for the choice of a legal luminary, Ladipo Johnson.

The group in a statement issued in Abuja on Saturday by its Executive Director, Ifeanyi Okechukwu, observed that political parties fielding placeholders have not taken time to study the amended Electoral Act 2022.

According to him, the electoral act is clear on provisions for withdrawal and substitution of candidates, warning that Sections 28 and 84 relate to only the candidate – presidential and governorship– and not their running mates.

He stated that substitution of candidates by political parties can only become possible in the case of withdrawal or death of candidates a presidential, governorship, Senatorial, House of Representatives and State Assemblies candidates nominated by parties through valid primaries in accordance with Section 29 and 84.

Okechukwu said, “Section 33 of the Electoral Act says ‘A political party shall not be allowed to change or substitute its candidate whose name has been submitted under section 29 of this Act, except in the case of death or withdrawal by the candidate ‘Provided that in the case of such withdrawal or death of a candidate, the political party affected shall, within 14 days of the occurrence of the event, hold a fresh primary election to produce and submit a fresh candidate to the Commission for the election concerned’; and to conform with section 33, section 29 must be adhered to, to ascertain categories of candidates captured.