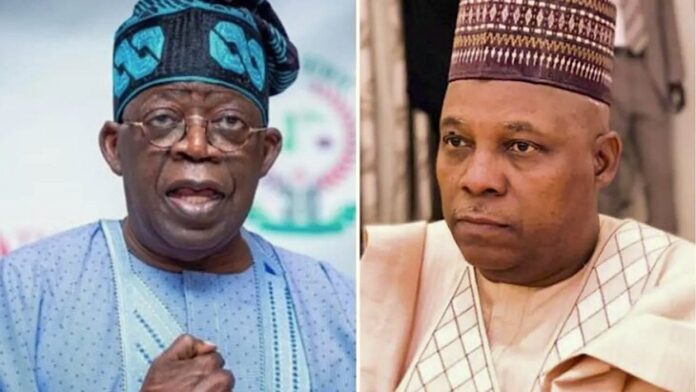 The official unveiling of the former Governor of Borno State,Kashim Shettima as the vice presidential candidate of the All Progressives Congress may have widened the crack in the party.

The choice of Shettima as Bola Tinubu’s running mate has been opposed by many Christian groups who are against the Muslim-Muslim ticket.

Some Muslim leaders from the North and South have also opposed the Muslim-Muslim ticket, however, President Muhammadu Buhari and some governors in the party have endorsed Shettima.

The crack in the ruling party became more visible when about eleven governors in the party boycotted the official unveiling of Shettima as the vice presidential candidate of the party.

A source that spoke with The Sun, claimed the former presidential aspirants were absent from the event because Tinubu failed to consult them and aggrieved governors before picking Shettima

The source further stated that Tinubu had a gentleman’s agreement with Northern APC governors that one of them will be considered as running mate, but he ignored them after picking APC presidential ticket.

He noted that many governors supported other presidential aspirants who are also against Tinubu’s presidential ambition until certain commitments are secured.

The source said, “Tinubu won against the wish of certain persons in the APC. As soon as he won, it was expected that he was going to reach out to many groups. That didn’t happen. Instead, he hurriedly travelled abroad.

“Upon his return, he went ahead and announced his choice, Shettima as his running mate. From the attendance during the unveiling of Shettima, it was obvious that he didn’t carry many people along.

“The crack is growing and PDP leaders are secretly reaching out to these aggrieved members. That’s not good for us as a party. There is still time and I hope Tinubu can quickly mend fences and go into the elections with a united house.”

Another source who spoke on condition of anonymity, said Tinubu refused to visit states in South East before the presidential primaries of the party, allegedly citing security concerns as the reason for the snub.

He said, “But he visited almost all the states in the North, where there’s more insecurity. Tinubu, from what we know, told South-East delegates that he would meet them in Abuja. They felt insulted.

“The same thing happened in the case of South-South. Maybe he feels that he doesn’t need them to win the main election. That may not be true. Their anger was obvious when Shettima was presented. They snubbed Tinubu.”

He further stated that some Christians are against Tinubu for ignoring them in the choice of his running mate.

The source said: “We hope that these people are appeased. The Christian community is angry. It is even difficult for APC members who are Christians to openly support Tinubu. You’ll be seen as an enemy by your people.

“If we must have a united party, we need to close our ranks. The belief that we have a united Muslim North supporting us is not true. Atiku is a Muslim and he’s from the North. It means we have to do more. The North will always stand by their own and Tinubu knows this fact.”