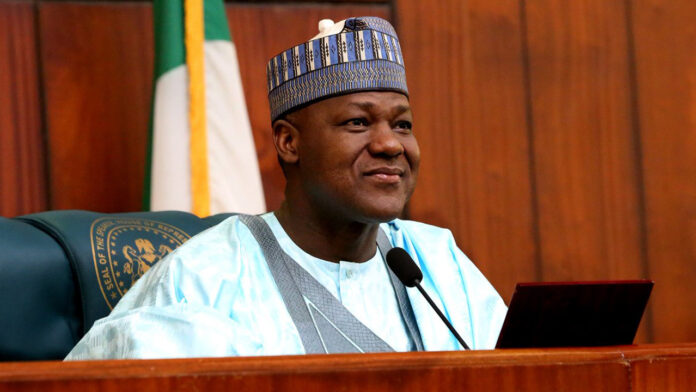 A former speaker of the House of Representatives, Yakubu Dogara, has said it was unfortunate that the All progressive congress (APC) “is now looking like a janjaweed party.”

Speaking during a summit organised by APC Northern Christians Leaders Summit Friday in Abuja, with the theme “Righteousness Exalts A Nation, But Sin A Reproach To Any People,” he said the APC “is no longer an inclusive political party.”

He warned that the adoption of a Muslim-Muslim presidential and vice-presidential ticket by the APC was capable of leading the country to disintegration like Yugoslavia.

“When we talk about a Muslim-Muslim ticket; God forbids that we should be understood to be objecting to Muslims or that we don’t want Asiwaju Bola Tinubu to be president. It is not about Senator Kashim Shettima either, but it is about what is right and what is wrong. It is about justice, fairness and equity.

“It is about Nigeria, its diversity and how it can be harnessed in an inclusive manner for the greater good of all of us. Be that as it may, some of us really wanted Asiwaju to be president because he has sacrificed much for our Party, the APC and for what he represents to so many people. So, our position cannot be against Muslims or Islam. That fact cannot be denied in any way.

“But when it comes to choosing between the love and admiration I have for an individual and what is right and what I believe represents my vision for Nigeria, my choice will clearly be for the latter. After all, my rise to the position of speaker was never going to be possible without the support of some Muslim members who believe that our diversity must be reflected in national positions for the unity, peace and advancement of our dear country.

“What gives me more hope about the Nigeria project is that there are many of our Muslim brothers and leaders who did not only warn the APC, but have had to call out the APC for adopting a Muslim-Muslim ticket which resulted into the Party ructions we are witnessing today.

“In 2015, when we were called janjeweed party, my response was usually very simple. I could then say that HE John Oyegun was the chairman of my party and my vice-presidential candidate was Pastor Yemi Osinbajo.

“We don’t enjoy that luxury anymore as the president; Senate president; speaker and his deputy; Senate and House leaders; national chairman and the deputy national chairman; presidential and the vice-presidential candidates are all Muslims, leaving the Christians with just the position of VP Osinbajo and deputy Senate president Omo-Agege at that level in a country whose population is fairly split between Muslims and Christians.

“For me, it is a rude awakening and I am so happy it happened sooner than later. The very fact that they said we should not worry about a Muslim-Muslim ticket while a Muslim-Christian ticket gave them sleepless nights should make you worry the more.

“The other funny argument in the media is the claim that without a northern Muslim on the ticket, elections cannot be won. The implications of that argument are quite unambiguous; Northern Muslims don’t vote for the South – even if the candidate is a Muslim like them – and, of course, don’t vote for Christians.

“However, nothing can be further from the truth. If you stretch this argument further, it may lead to questions such as, if Muslims in the North don’t trust a southern Muslim for any reason(s), why should Christians in Nigeria trust a Muslim from the South and North? These are the kinds of arguments I hate to engage in and which we must avoid if we hope not to injure the health of our Republic.