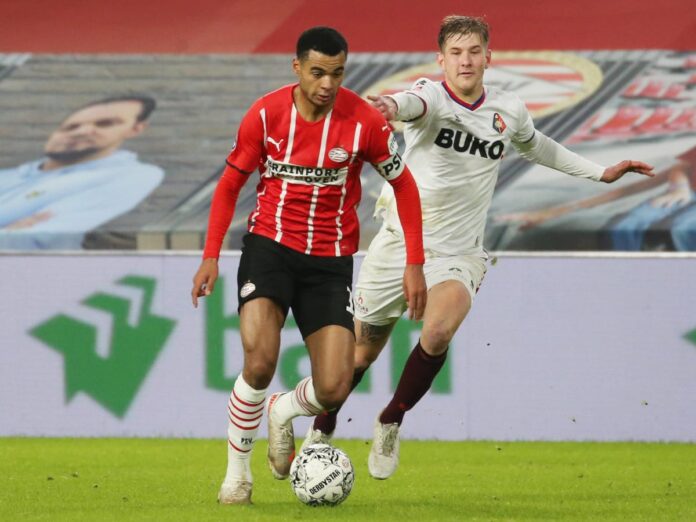 Manchester United have largely agreed to personal terms with PSV Eindhoven star Cody Gakpo for a transfer to Old Trafford this summer.

The Red Devils are looking to bolster their attack. The Holland international is someone United are looking at as an option, with Erik ten Hag keeping an eye on the 23-year-old.

PSV are looking for a fee in the region of Є35million and Є40million to part ways with Gakpo. The Dutch national was one of the best players in the Eredivisie last season.

Gakpo featured 47 times for the Boeren, scoring 21 goals and providing 15 assists. He has also started off the season in fine form for Rudd van Nistelrooy’s side.

United seem to lack depth in the forward line. Christian Eriksen started in the centre-forward position in Ten Hag’s first competitive game in the Old Trafford dugout. Anthony Martial was sidelined due to injury.

Cristiano Ronaldo was on the bench against Brighton & Hove Albion. There is uncertainity around the Portugal international’s future in Manchester. The 37-year-old is vying for a move away from United.

The Red Devils struggled to score a goal in the first two fixtures of the 2022/23 campaign. It wasn’t until Jadon Sancho slotted the ball in the back of the net against Liverpool that United fans got to celebrate a goal. Marcus Rashford also got on the scoresheet against the Merseysiders.

However, it remains to be seen whether the English duo can stay consistent throughout the season. In the previous campaign, Sancho and Raashford had a hard time.

Fresh faces in the side increase competition amongst the players in the squad to secure a place in the XI. If United get him, Gakpo is the sort of player with the quality to fight for a place in Ten Hag’s team.