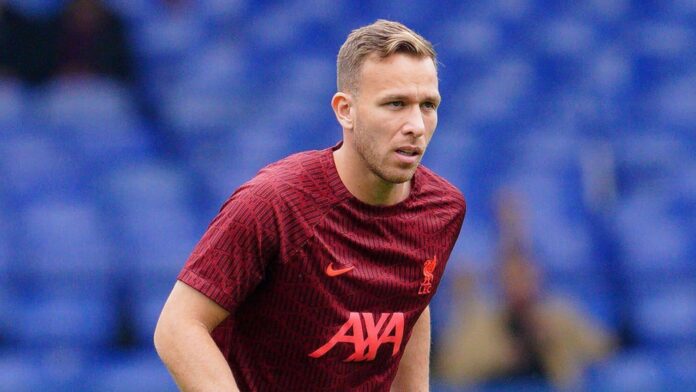 Arthur arrived on a £4m loan deal from Juventus on transfer deadline day, with Liverpool holding a £33m option to make the transfer a permanent one next summer.

But the Brazilian, who made his debut as a late substitute against Napoli in the Champions League, is lacking fitness after playing precious little football in recent months after his 2021/22 was also ended prematurely by injury trouble.

With others from the first-team squad away on international duty, Lewtas confirmed that Arthur waived time off in order to train and build up his fitness – he appeared as an over-age player for Liverpool’s Under-23s in Premier League 2 at the weekend and then again in the EFL Trophy.

Earlier this week, Arthur has recruited his own physio, fitness coach and nutritionist to help him, with private sessions planned in conjunction with Liverpool staff.

“Arthur has been in over the international break to play games and build up his fitness,” Lewtas told the Liverpool Echo. “That’s off his own back, so that shows his level of professionalism. He has been great with the lads as well. He has been first-class.

“In training on Monday, he was excellent, he really drove the lads and as a matchday minus one, it’s probably the best one we’ve had.

“He wants to get fit, he doesn’t need a week off, so it’s come from him. He doesn’t speak Scouse and I don’t speak Portuguese, but I think you can tell from the body language. In the meetings we went through some extra things and cleared a few things up. He has embraced it.

“He first trained with us on Friday. He trained with the first team and then he had a session with us for the team that was going to play against Leicester. He’ll do a little work with us during the international break.”