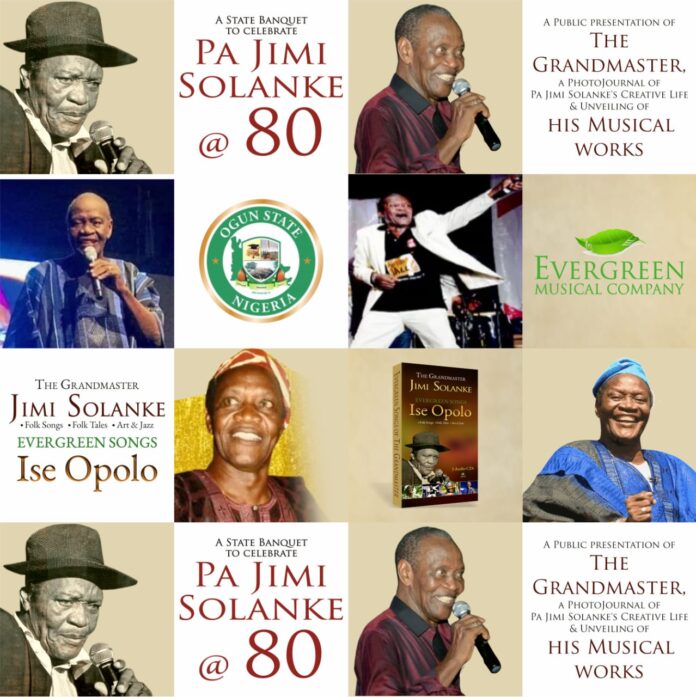 Jimi Solanke, known honorifically as Baba Agba, Yoruba term that perfectly describes his advanced age, veteran status, and enormous height as a multifaceted performer, is back in the spotlight a few months after his historic 80th birthday on July 4.

The celebration continues at June 12 Cultural Centre, Abeokuta, Ogun State, on October 22. With support from the Ogun State government, Evergreen Musical Company Limited will release a compilation of the complete musical works of Solanke, and unveil a 127-page photo journal that tells his story. The collaboration is commendable.

The photo journal, produced by the company’s managing director, Bimbo Esho, is her first publication “after my 20 years of extensive research on the lives and times of Nigerian music icons.” It is titled The Grand Master.

Nothing perhaps better illustrates Solanke’s passion for thespianism, and devotion to its promotion, than his ongoing building project. The seasoned actor, composer, singer, dancer, folklorist and storyteller, gave an insight into this endeavour in an interview just before he entered his octogenarian years.

The place he is building in his hometown, Ipara, Ogun State, he said, “is a centre for creative and performing arts enhancement.” It is called Ibudo Asa. He explained: “If you’re a graduate and you are still looking for how to step in and stamp your feet on the ground of performances, come, you will get your skills enhanced. We will through a practical approach take you through the rudiments of stage presence, voice mastery, acting, and total theatre experience for continuity of live stage performance…We will be having a lot of people coming for workshops on different areas of thespian life.”

On how much work has been done, and what still needs to be done, Solanke provided information showing that the centre could do with assistance. He said: “Well, we have put up a structure in place with rooms each having its own toilet, the ceiling is done and the whole place wired by an electrician…My hall contains at least 50-60 people. We have hosted a lot of artistes and visitors already. We have done book readings, and that is still testing, testing the microphone. It is the outside hall, the stage, and the sitting area that we are facing now.”

Support from government bodies, cultural organisations, culture-friendly companies and individuals, for instance, can help get the centre completed. As he struggles to realise his dream, which is a way to give back to society, there is a lesson for those in the arts sector on the need to embrace business-like approaches to project funding.

One of his popular songs, Omiyale, which was inspired by the Ogunpa flood in Ibadan many years ago, is still relevant today as parts of the country are faced with flooding problems.

He was among the first diploma students in Nigeria’s first school of drama, which became the Department of Theatre Arts in the University of Ibadan, Oyo State. It was there his voice was trained and his spoken English polished. He was, in his words, “trained in all the ramifications of theatre” and “arrested by the spirit of drama.”

By this time, he was already known as a singer and his songs were being played on radio. He began his professional acting career in the early 1960s, in Ibadan, and was one of the pioneer members of the Orisun Theatre Company founded by Wole Soyinka, the prominent Nigerian playwright who, in 1986, became the first black African to win a Nobel Prize in Literature. He later joined the Ori Olokun Centre in Ile-Ife.

When he moved to America, he formed a performing group called The Africa Review, which promoted African culture. The group performed mainly in schools, and was well known in Los Angeles, California, for dancing and storytelling. ”That was where I actually started telling stories,” Solanke recalled. He used folk tales to demonstrate the value of African culture.

Described as a “master storyteller” by CNN, he created two popular children’s television shows based on storytelling, Storyland and African Stories, after he returned to Nigeria in 1986.

He has acted in films by Wole Soyinka, Ola Balogun and Tunde Kelani, all big names, which says a lot about his worth. “But my own interest is not in film making,” he declared. “I’m made for stage roles.” On stage, he has played Ovonramwen Nogbaisi, Kurunmi, Elesin Oba, and Sizwe, in well-known plays.

He takes his profession seriously. Whether he is playing a role, making music, dancing, or telling a story, there is no question about his creativity, professionalism and enthusiasm. Ever conscious of his Yoruba and African roots, he remains a true cultural ambassador.

The forthcoming two-in-one event in Abeokuta is yet another plus for Lagos-based Evergreen Musical Company, described as “Africa’s greatest custodian and producer of music of yesteryears.”

When I first met the company’s Chairman/CEO, 75-year-old Femi Esho, some years ago, I had no doubt that he was a music collector extraordinaire. He gave me a valuable collection of the works of Afrobeat king Fela Anikulapo Kuti: “5 Audio CDs, 1 DVD (Live Performances) and 24-Page In-Depth Biography.” The compilation was done by his company.

In 2019, the company also released a compilation of 660 songs by Juju music legend Chief Ebenezer Obey. So, compiling Solanke’s works was familiar turf to the company.

According to Esho’s daughter, who is managing director of the company and author of the new Solanke photo journal, he is “the undisputed largest collector of music of yesteryears with over 150,000 vinyl plates made up of 78rpm breakable plates, 45rpm and 33rpm, hundreds of reel-to-reel tapes, thousands of cassette tapes of various music along with archival materials such as His Master’s Voice (HMV), various reel-to-reel machines, various turntables with the oldest 100 years old, books and newspaper articles on Nigerian music, video recordings of early Nigerian music icons.”

This means that there is a lot of room for cultural collaboration between the company and culture-friendly entities in the public and private sectors. The company’s collaboration with the Ogun State government on the Solanke celebration illustrates the possibilities