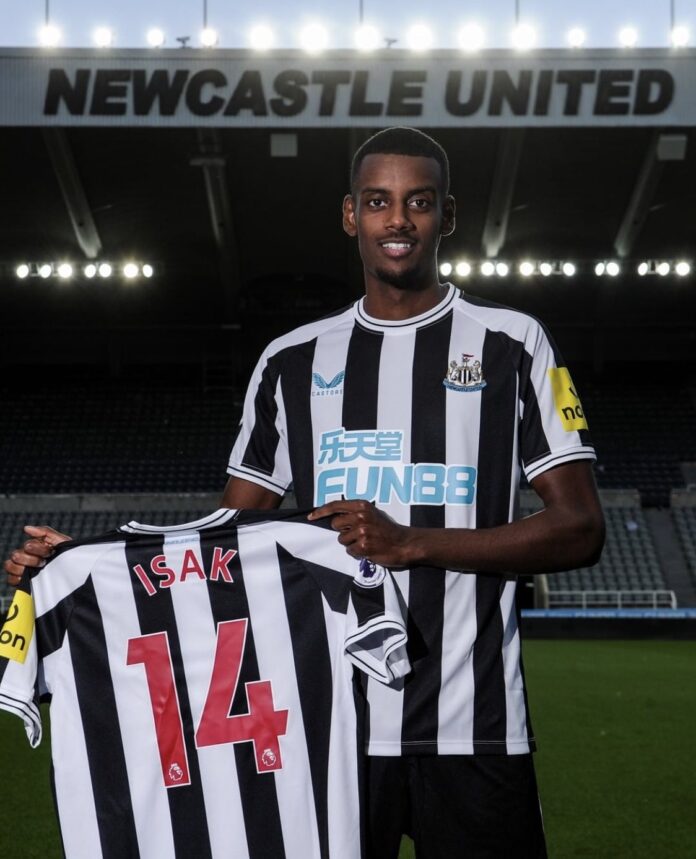 Newcastle have completed the signing of Swedish striker Alexander Isak from Real Sociedad in a record-breaking deal.

The Saudi-backed Magpies are reported to have parted with £60million to land the 22-year-old forward.

And Isak revealed that the lure of playing in front of the passionate supporters at St James’ Park was a big factor in his move to the North East.

“I’m delighted to have it done. It was a big, big decision for me but it is a decision I am really happy with,” Isak said.

“It is a great, historical club that I think anyone would like to play for, with amazing fans. They were a big part of why I came here — and also the club’s project, which is one that I really believe in.

“You always want to go into a team and know how they play. I think Newcastle play very attractive football and I want to be a part of that.”

Isak netted 33 goals in 105 LaLiga appearances for La Real and has struck nine times in 37 caps for his country.

The fee surpasses the £40m that Newcastle spent on Joelinton in 2019 and Bruno Guimaraes last January, and he is the fourth summer signing following the arrivals of Sven Botman, Matt Targett and Nick Pope.

Boss Eddie Howe was delighted to welcome the “outstanding” talent to Tyneside.

Howe said: “I’m very excited that Alexander has chosen to join us. He is an outstanding talent who is capable of making a big contribution to the team.

“He is technically very good, with a mix of attributes that will complement us, but he is also at a great age to grow with this club.

“I want to thank the club’s owners and transfer committee for bringing Alexander to Newcastle. We are all delighted to have him on board.”

Newcastle visit Wolves on Sunday looking to maintain their unbeaten start to the season.