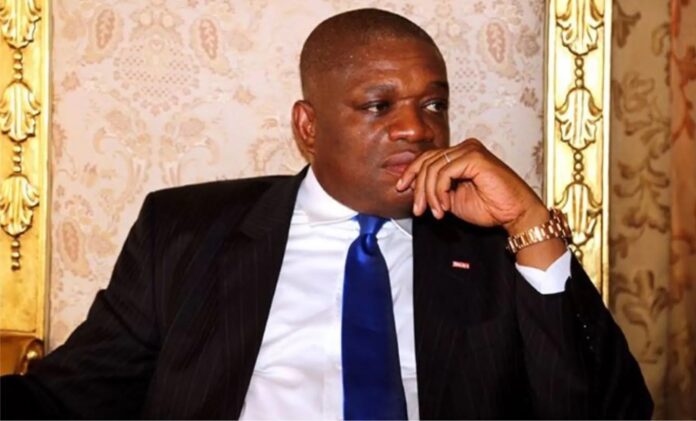 The Chief Whip of the Nigerian Senate, Oriji Kalu, has said he would bring military forces to “comb” bushes in Abia State and “kill” those behind insecurity in the state.

Mr Kalu stated this on Saturday during his visit to the Umunneochi Local Government Area of the state as part of his ward assessment tour of Abia North District which he represents.

Mr Kalu, a former governor of Abia, also posted a Video Clip of the visit on his Facebook page. He said the insecurity in the state will end after the bushes would have been combed by security agencies within the next four months.

The senator said bushes in the other parts of the state would also be raided by security agencies to destroy camps of criminals operating in the state. I am warning everybody, do not allow your children to live in the bush. Anything they (military) see in the bush, they will destroy,” Mr Kalu said.

The former governor of Abia State also bemoaned the impact of the sit-at-home order in the South-east which is enforced every Monday by the outlawed Indigenous People Biafra.

“We want peace here. We want our businesses to continue. The Igbos are losing N25 billion each day they close their businesses. And they cannot continue. I wish I am still the governor of Abia State, but I am not the governor,” Mr Kalu said.

The Senator, a member of the All Progressives Congress (APC), said he would hold a meeting with the state governor, Okezie Ikpeazu, next week to ensure “we reposition the state and cooperate with the Federal Government of Nigeria.”

He said he is a patriotic Nigerian, and that he has always stated his stance on the Igbo cause.

Mr Kalu said he acted in the overriding interest of the Igbos when he was the Abia State governor.

“President (Muhammadu) Buhari will surprise you people in the next four months. Warn your children to leave the bush, because we will comb the bushes,” the Senator told his constituents.

“Anything we see in the bush, we will kill because we have disturbed the president so much that there is insecurity (in the South-east). The aircraft will come here. It will be a surprise raid. So, people living in the bushes should leave. All parts of Abia, we will comb it,” Mr Kalu added.

Abia State has witnessed increased criminal abduction lately,  especially in  Umunneochi. Several people, including clerics,  have been abducted by gunmen in recent attacks.

About 10 days ago, gunmen abducted a catholic priest and a seminarian along the Okigwe-Umunneochi Road, which is between Imo and Abia States.

The victims were released two days later after reportedly paying ransom to their abductors.

In July, gunmen abducted some travellers in Lokpanta, a community in Umunneochi Local Government Area of Abia State.

Last month, gunmen abducted scores of passengers along the Enugu-Port Harcourt highway between Leru and Ihube Communities of the council area in the state.

“What is happening in Abia is not acceptable to me”, Mr Orji Kalu said.