I will never return to APC – Gov Obaseki 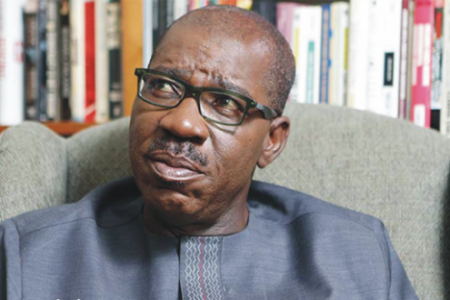 Governor Godwin Obaseki of Edo State has vowed never to return to the All Progressives Congress (APC), saying the party forced him to join the Peoples Democratic Party (PDP) in the nick of time.

Governor Obaseki disclosed this in Abuja on Monday following the defection of some governors elected on the platform of the PDP to the APC.

He added that he was chased away from APC in 2020 while seeking the party’s ticket for re-election, insisted that he would not join the defection train.

The Edo Governor therefore described rumours making rounds that he intended to return to the APC as laughable.

He maintained rather that he is committed to serving the people under the “stable, people-oriented and democratic structure” of the PDP.

Governor Obaseki who is the Chairman of PDP’s e-registration exercise, declared his commitment and strong belief in the PDP as a party that holds the solution to issues of governance-deficit facing the country at the moment.

Obaseki in a statement by the spokesman for the PDP, Kola Ologbondiyan yesterday, was quoted to have urged Nigerians to remain steadfast in their determination of rallying on the platform of the PDP to “rescue the country from the misrule of the APC.”

Also, he was quoted to have called on Nigerians to turn out enmasse and register with the PDP as the party’s nationwide online electronic registration of members takes off in two weeks’ time.

Further, Governor Obaseki who was said to have addressed members of the PDP e-registration committee in Abuja, stressed that the pilot scheme of the exercise will begin in Edo and Anambra states.

“Nigerians must key into the e-registration exercise of the PDP as the party remains the solution to the myriads of problems confronting our nation today under the APC.

“From all indications, it is clear that the PDP remains the party that provides the appropriate platform, outlook and sense of direction to return our nation to her of pride of place in the comity of nations”, he added.